The long awaited relaunch into service of Liverpool 869 and the return to service for one day only of Southampton 45 are set to be the operating highlights of the TMS 60 event at the Crich Tramway Village on Saturday 19th September. The event – which encompasses the annual Enthusiasts’ Event at the home of the National Tramway Museum will also see an intensive tram service with up to 15 trams in service at any one time whilst the highlight of the photographic line-ups looks set to be a display of open-top trams including some from the Exhibition Hall.

2015 marks the 60th anniversary of the formation of the Tramway Museum Society and this public event – there will also be an event for members at the museum in November – seeks to celebrate this milestone and no celebration of 60 years of the Society is complete without Southampton 45. Of course this tram was the very first tram to be preserved and although it was withdrawn at the end of last years Electric 50 event it is planned to return it to service once again – provided that it is successfully commissioned. 45 will run in service all day starting off with a run to Wakebridge at 1000 and ending with the final journey of the day at 1800, along with Glasgow 812.

When 45 heads to Wakebridge at the start of the day it will be joined by the other open top cars for the first major photographic opportunity of the day (including London County Council 106, London United Tramways 159 and Glasgow 1068).  But that is not where the open top fun ends for the day as the major photographic line-up is also due to feature open-top tramcars – including some of the non-operational examples from the Great Exhibition Hall. Details of which trams will be part of this line-up (which is due to take place at 1430 for an hour – obviously this being a tram event timings are only approximate) have not been revealed but when you think of some of the out of service open toppers at Crich you start to see how special the line-up could be. Although this is likely to be dependent on the weather so let’s hope for some dry weather!

The other highlight of the day – and for many probably THE highlight of the day – will be the relaunch into service of Liverpool 869 following the conclusion of its overhaul. Last used in 2011 (on a limited basis) 869 has spent the past year or so in the workshops undergoing the usual exhaustive overhaul and with this now completed it is ready to return to service once again – just a week after fellow Liverpool tram 245 is due to be launched at Birkenhead making a good couple of weeks for Liverpool trams. The standard Crich launch ceremony is expected at 1100 after which 869 will lead a 1930s tramcar procession before it enters service for the remainder of the day.

An intensive tram service will run from 1030 all the way through to 1800 with up to 15 trams in action at any one time. Obviously the usual caveats apply but subject to availability and weather it is planned that trams will run as follows:

The Tramway Museum Society isn’t the only organisation to be celebrating 60 years in 2015 and the event will also be graced by a Rolls Royce Silver Cloud and the Derbyshire Constabulary Male Voice Choir to celebrate their anniversaries as well. There will also be a surplus Book Sale in the Great Exhibition Hall and curatorial handling sessions throughout the day.

* Full details and an outline programme of events is available at http://www.tramway.co.uk/events/tms-60. The final confirmed programme was released on Friday 18th September with a few small amendments to the operating schedule, and the above article has now been updated accordingly. 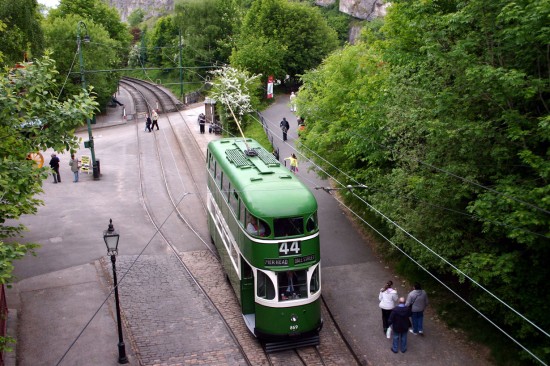 Liverpool 869 will re-enter service on Saturday 19th September following its overhaul as part of the TMS 60 event. This photo shows 869 during its last period of operation - 31st May 2010 to be precise - about to come under the Bowes Lyon Bridge, (Photograph by Gareth Prior)