Posted on Thursday 30 July 2015 by Gareth Prior

Welcome back to our latest look at just when and where you can go and enjoy a ride on a traditional tram in the British Isles over the next seven days or so. Over on the Isle of Man at the moment the Manx Heritage Transport Festival is in full swing (until Sunday 2nd August) and on Friday 31st July there is a rare chance to get a guaranteed look at no. 4 on the Seaton Tramway as it is out for Pirate Day. Looking slightly further ahead the next special event takes place at the Crich Tramway Village between Monday 3rd and Sunday 9th August with WW2 Home Front and of course there are plenty of other tramways who although they don’t have special events are still running and will gladly welcome anyone who wants to go for a ride… 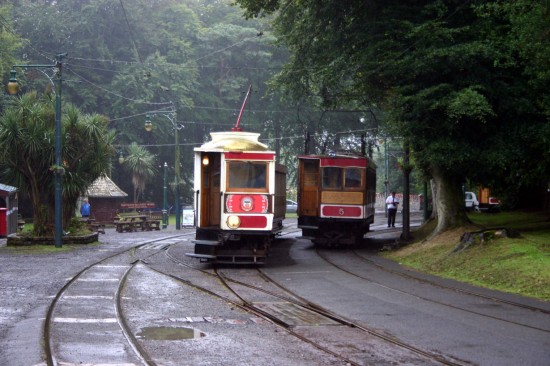 A typical summer view at the old Laxey Station on 14th August 2013 as the Manx Electric Railway's 6 hauls trailer 41 with Snaefell Mountain Railway 5 racing alongside. (Photograph by Gareth Prior)