Posted on Wednesday 29 July 2015 by Gareth Prior

Today in our “Picture in Time” series we are heading back more than 50 years ago to 1963 with a view of Grimsby & Immingham 20 on the day it arrived at Crich. Of course we now know this tram better as Gateshead 5.

No. 20 had operated on the Grimsby & Immingham line for 10 years between 1951 and 1961 having originally been constructed in Gateshead’s own workshops as no. 5 in 1927. Following the closure of the Gateshead system it was obtained along with several other trams to operate on the Grimsby & Immingham line where it received its new identity including the drab plain green British Railways livery. After the Grimsby & Immingham line also closed the tram was secured for preservation and arrived at Crich in 1963. It did not run at the museum until 1968 by which time it had returned to its Gateshead identity and was more often than not part of the operational fleet until 2007 when it was withdrawn requiring workshop attention. It is still awaiting this today and is normally stored in the depots. 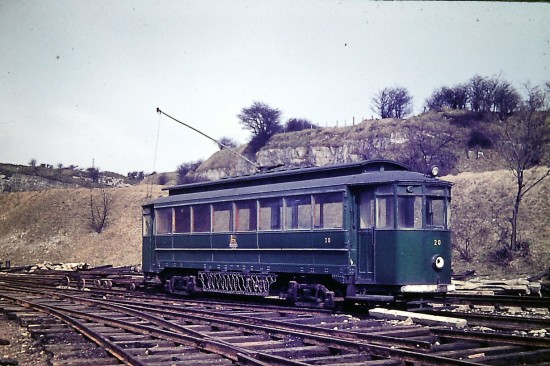