We are off to Manchester Metrolink once again for today’s Picture in Time image and this time the star of the feature is T68 1008 when we catch up with the vehicle on 6th April 1992 – the first day of public service on the line.

In these images we see 1008 operating as part of a double unit on the first day of services between Bury and Victoria and its partner on this day was 1004. In fact the two were chosen to operate the very first public service between Bury and Victoria and continued to run together following that service. 1008 had been delivered to Manchester back on 28th December 1991 and following on from its starring role on the first day it was also included in the formal opening ceremony of Metrolink through the city centre on 27th April 1992 when at 1100 it broke through a banner on the southbound track at High Street. But its “firsts” didn’t end there! On 15th June 1992 it formed the first passenger service from Victoria to Altrincham and return departing Victoria at 0523 and when it arrived at Altrincham it again broke through a banner to mark the occasion. After those three major achievements it was rather a mundane existence for the tram although in May 2004 it did leave Manchester for refurbishment works at Wolverton returning to service in September of the same year and then in March 2007 it was named Steve Hyde on one cabside to mark the departure of the signalling engineer from Metrolink. In 2011 it received the universal running modifications but then little over a year later the decision was made to withdraw the tram with it running its final journeys on 13th June 2012 – only the third to be taken out of service. It lingered in Manchester for a further two years before leaving for Rotherham and scrapping on 16th May 2014.

We have two images of the tram for you today on the very first day of service – 6th April 1992. Both times 1008 is running with 1004 and we see it both on the way to Bury and also at Bury Interchange. 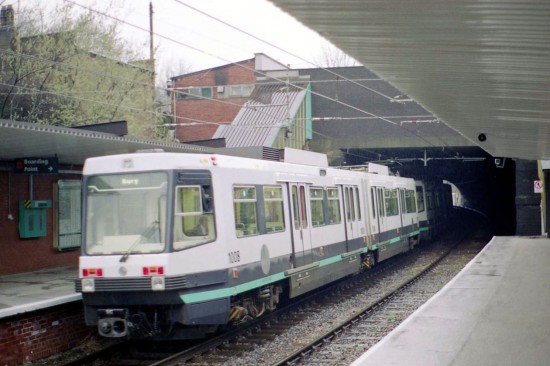 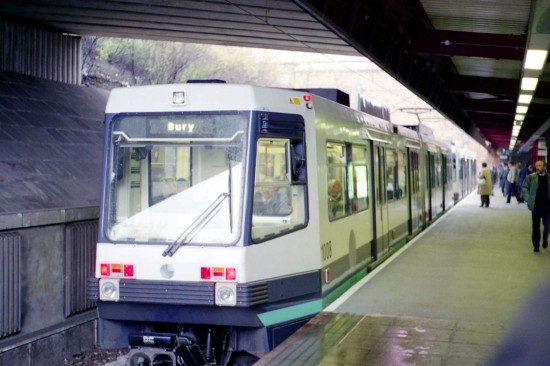