Posted on Sunday 5 July 2015 by Gareth Prior

As we continue our way through the Manchester Metrolink T68 fleet the latest instalment of Picture in Time features 1007 which is, of course, the only modern light rail vehicle to have a guaranteed future in preservation having been acquired by the Heaton Park Tramway.

1007 arrived at its new home on 4th December 1991 and following testing and commissioning entered service on the first day of public services – 6th April 1992. Before this it had been used for a press preview trip from Queens Road Depot to Bury and then on 27th April 1992 it made history when it became the first tram to operate through the street section of Metrolink between Victoria and G-Mex. 1007 then settled into service although did spend seven months out of service from late 2000 for floor repairs and then in 2005 a collision with the buffer stops at Piccadilly necessitated a trip to Crewe for repairs. Another trip away followed in 2008 when it became the last of the class to head to Wolverton Works for full refurbishment. But that is not where its claim to fames end! In March 2010 it became the first tram to test the MediaCityUK extension and then on 4th February 2014, working with 1022, it was the last T68X to run in service before being replaced in service. Final withdrawal came on 10th February 2014 and at the time of writing it is stored at Trafford Depot awaiting movement to the Heaton Park Tramway and the start of the next stage of its life. 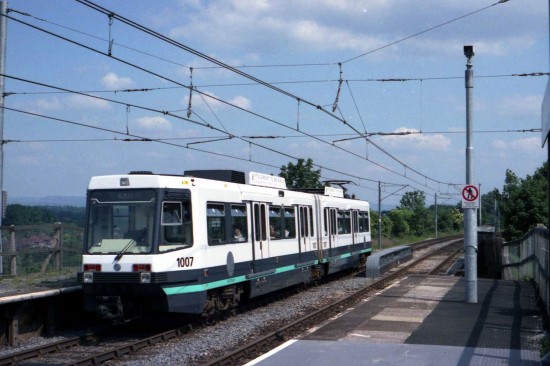