With London County Council 106 having just returned to service soon at the Crich Tramway Village what better tram to feature as part of our “Picture in Time” series? We catch up with 106 at Crich back in 1989 in today’s picture.

London County Council 106 was originally constructed in 1903 by the Electric Railway & Carriage Company and is a fairly typical tram of its period. However unlike other undertakings at this time the London County Council system was operated completely on the conduit system and so 106 was not fitted with a trolley pole from new although this was added in later years as the LCC bowed to the inevitability of overhead power. The majority of the class was withdrawn by the mid 1920s but 106 was to be one of the lucky ones as it was converted into a snow plough (albeit without its upper deck) and renumbered 022. Saved for preservation it had already been set aside for display at the London Transport Museum but ultimately it was to be restored and entered service at Crich in 1983. Since this date it has spent more time in service than not but was withdrawn in 2010 requiring major attention which it has received – thanks to funding from the London County Council Tramways Trust – and was relaunched into service on 13th June 2015. 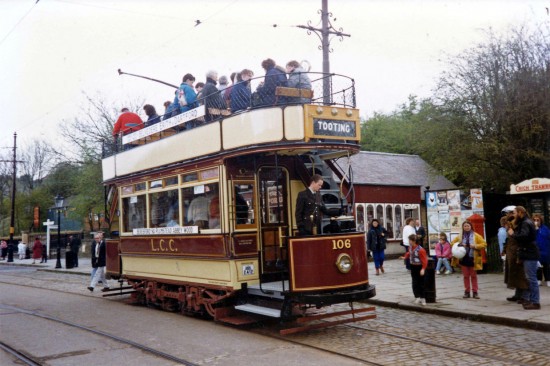