It is time for another tram of the national collection to feature in “Picture in Time” today; this time the tram in question is Leeds 600. This tram is now be stored out of public view at the Clay Cross store of the Tramway Museum Society and has some of the lowest recorded mileage of any of the trams in the national collection.

Leeds 600 started off life as Sunderland 85 where it was built in 1931 but by the start of the Second World War it had been stored out of use and then in 1944 Leeds Corporation Tramways seemed to become its saviour when they acquired the tram. But it wasn’t to be a straightforward transfer for the tram as the decision was eventually taken to rebuild the tram into the style we see today although this took many years and it was until the 1950s that it was ready. Operated on the Hunslet route 600 – as it was renumbered in Leeds – only lasted until 1957 when it was withdrawn from service once and for all and eventually was preserved and made its way to Crich. Never receiving any workshop attention it ran in 1969, 1971 and 1972 but that is it and it soon became a static exhibit. In the mid 2000s with space becoming a premium – as seems to happen periodically – 600 was one of three trams chosen to be moved to Clay Cross (the others being Sheffield 46 and Glasgow 1100) and it duly did this after being a major draw to the Enthusiasts’ Day in September 2005. 600 remains at Clay Cross today and it is likely to remain there for some time to come.

We see the tram here at the back of the one of the depots. Of note is that it is joined by another tram now resident at Clay Cross – Blackpool Dreadnought 59. 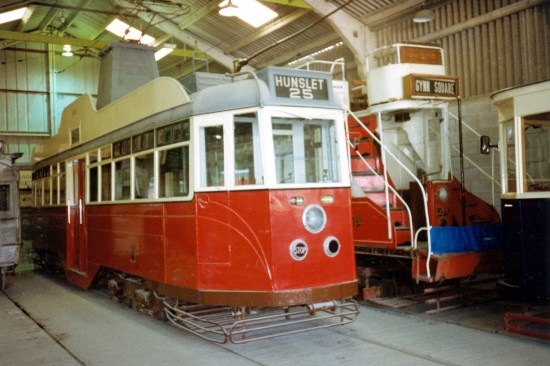 5 Responses to Picture in Time: Leeds 600