Posted on Sunday 24 May 2015 by Andrew Waddington

Blackpool Balloon 715‘s recently applied 1990s green and cream livery has recently been enlivened by the addition of between-deck advert banners for the annual Fleetwood Festival of Transport, more commonly known as Tram Sunday. This is the most prominent advertising to be applied to a member of the Blackpool heritage fleet to date and also revives a tradition of similar adverts worn by the Balloon cars for many years.

715‘s new adverts virtually fill the between-deck panelling on both sides and feature dark blue lettering and a colourful logo showing various forms of transport, on a pale blue background. Oddly, the name ‘Tram Sunday’ dominates the adverts, despite people connected with the event frequently insisiting that this is not what it is called! No dates feature, suggesting that the contract may not solely be for this year. The adverts were seen by the public for the first time when the tram operated on the green service on Saturday 23rd May, although the tram did not stay out all day as it was swapped for Brush car 631 after developing a minor fault. Hopefully 715 will now be seen on the promenade frequently throughout 2015, helping to publicise the Fleetwood event.

The addition of adverts to a heritage tram may be criticised as it has arguably spoilt the appearance of the freshly painted 715; however whilst the advert itself may be new, the style is certainly appropriate to this class of car. Indeed each summer season such advertisements were applied en mass to the Balloons and when the 1990s livery dominated, it was actually quite rare to see one without any external adverts at the height of the season. At least a fairly plain liveried car has been chosen, and as well as helping to promote a tram-related event, the revenue gained from the advertising contract will no doubt be a welcome boost to Blackpool Transport’s heritage tram activities. 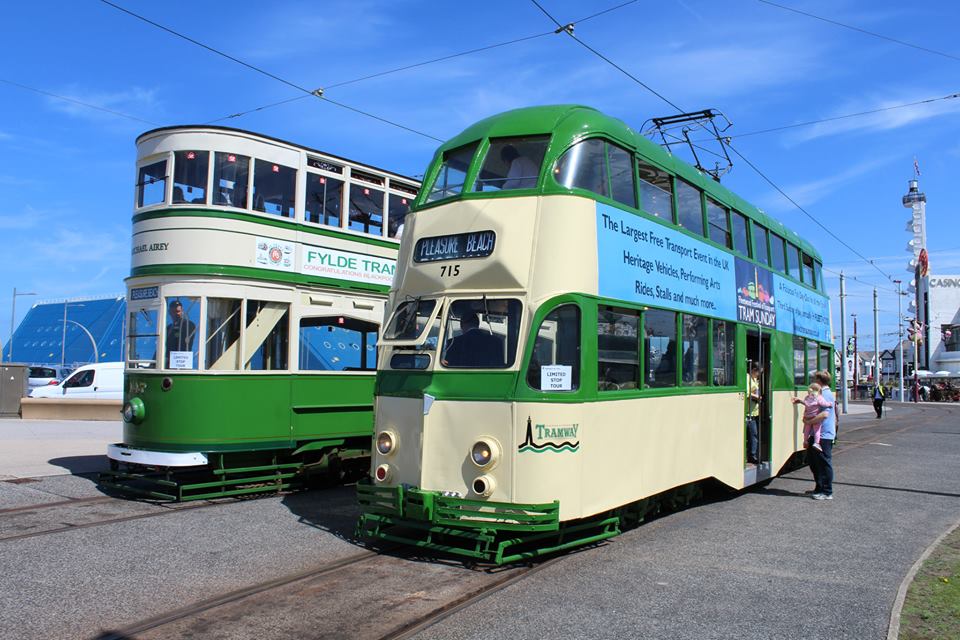 Glorious sunshine shows off 715's colourful new adverts for Tram Sunday as the tram stands at Pleasure Beach alongside Standard 147 on 23rd May. (Photo by Bradley Jones)