It has been announced that yet another member of Blackpool’s heritage tram fleet is to be returned to service this year, with Twin set 675+685 the latest to benefit from workshop attention. The duo have already been split up and are set to be repainted before returning to use for the 2015 illuminations season.

675+685 last ran in passenger service on the final day of the 2011 season, when they operated a special farewell tour for the Fylde Tramway Society – appropriately enough, the other tram to feature on that tour was Balloon 715 which has of course also been restored to service this year. That evening was also the last time that two Twin sets were running together on the Blackpool tramway, but hopefully that will happen again before too long now that set 5 are in the works.

During May, 675+685 were split and 685 is to be tackled first, being moved into the Paint Shop where it is currently being prepared for repainting. The livery it will receive is being kept a secret for the moment, but it has been confirmed that it will differ from 272+T2 which carry the original all-cream livery worn by this class. Unless the trams are painted in Metro Coastlines livery again (which seems unlikely but certainly isn’t impossible), this will end the Metro liveries’ presence on the tram fleet with the sole exception of Towing car 671 which returned to the fold earlier this year; however as it is currently intended as a parts donor rather than a restoration candidate, it cannot really be considered a member of the heritage fleet and so arguably doesn’t count.

However set 5 are painted, having two Twin cars operational after a gap of four years is definitely something to look forward to for later on this year, and it also speaks volumes regarding the success and faith being placed in the heritage tour operations that a second Twin car is now considered to be a worthwhile investment. It has been stated that 675+685 will be a useful asset during the annual autumn illuminations, and if available then volunteer guards will hopefully allow these trams to be well used on illumination tour duties, helping to shift the large crowds at weekends and during the notoriously busy October school holidays.

Incidentally, 272+T2 have also been through the works recently after suffering from a high-profile electrical fault earlier this month. As a result the pair missed the late May Bank Holiday period but are expected to be back in action again soon. 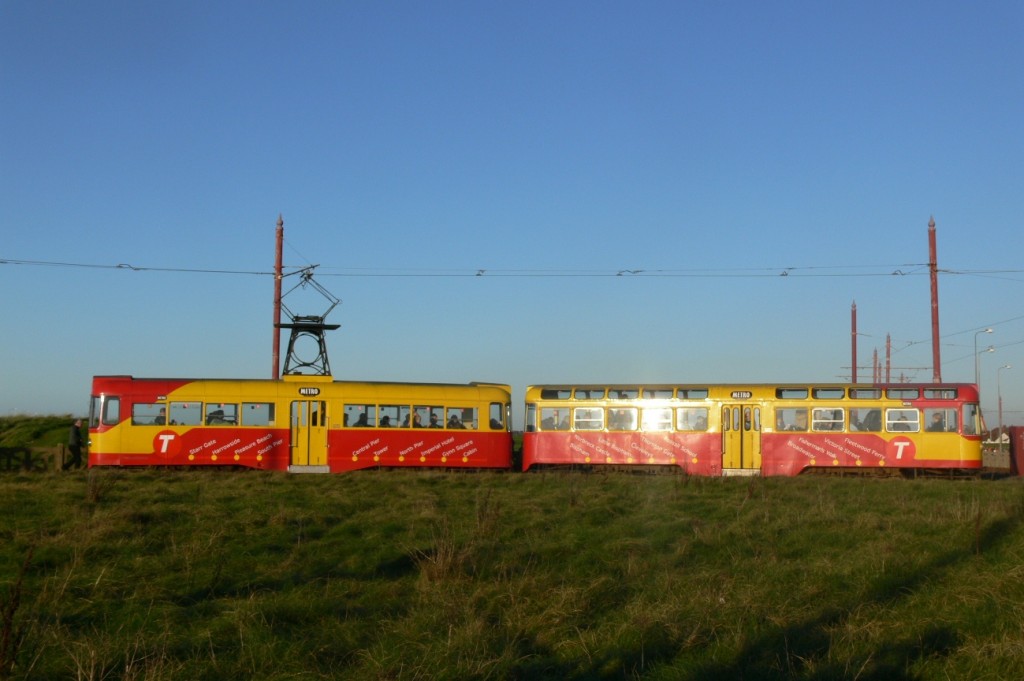 6th November 2011, and the sun sets on not only the traditional tramway but also 675+685's operating career - at least that's what we thought at the time! This was almost certainly the last day of use for this tram in Metro colours, however. (Photo by Andrew Waddington)