Posted on Saturday 28 March 2015 by Gareth Prior

On the day that heritage tram operations return to Blackpool for another season we head to the north west coast for our latest edition of “Picture in Time”. This time the date is 31st August 1993 and we feature Blackpool Balloon 707 at a time when it was carrying an all over advert for Pontin’s.

We last featured 707 in this series last week when we saw it in 1969 whilst still carrying fleet livery and with double indicator blinds but 24 years later things a changed for the tram. The most obvious is, of course, the bright yellow and white all over advert for Pontin’s which had been applied in 1990. Amazingly this was actually the seventh different advert design that the tram had carried since becoming the very first Blackpool tram to carry an all over advert but was to be the last for this particular tram as a traditionally shaped Balloon. The tram was withdrawn at the end of 1993 and became the first of the flat fronted “Balloons”.

Our view shows the tram departing Bispham on 31st August 1993 running through to Cleveleys with a light load of passengers on the lower deck the majority of whom were probably unaware – and probably not caring much either! – that the tram would only have a few months more of service in this condition. 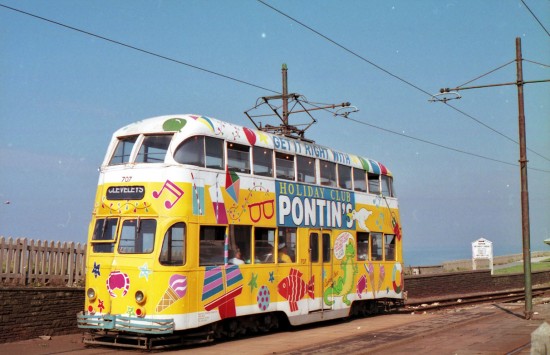