The North Eastern Electrical Traction Trust have launched an online appeal to assist with the cosmetic restoration of one of the most distinctive preserved Blackpool trams in existence today – the illuminated Hovertram 735. The iconic feature car was transported to NEETT’s base near Sunderland last year after spending several years hidden away from public gaze in Scotland, and mere months later plans are being formulated which will hopefully result in another improvement in its fortunes.

The Hovertram was one of the fleet of illuminated trams built to carry passengers for tours of the famous Blackpool illuminations in the 1960s, and it lasted in service until November 2001 when it was finally retired as it was in dire need of a major overhaul, including a complete re-wire. With declining demand for tours and general uncertainty regarding the future of many of the tram fleet, this work was destined not to go ahead and instead 735 was sold to a preservation group in Scotland who looked after it for several years before it was sold again, returning to England in 2014.

Since this time, some minor work has been undertaken to repair various damaged panels which were sustained during its lengthy period of storage at Blackpool. Now, a proposal to carry out more extensive restoration work has been made and a public appeal for donations to finance the first stage of the project has been launched through the website ‘gofundme.com’. The aim is to raise £10,000 to carry out structural work and also to enable the external lighting to shine again, creating a unique and stunning exhibit for the North East Land, Sea & Air Museum and allowing the public to enjoy this very special tram for the first time in over a decade. Looking further ahead, NEETT ultimately hope to have 735 restored to full running order and there is a long-term goal of returning it to Blackpool for operation on the promenade once again! Naturally, this is some way off but the current appeal of funds is a very positive step in the right direction and it is to be hoped that it will be well supported. 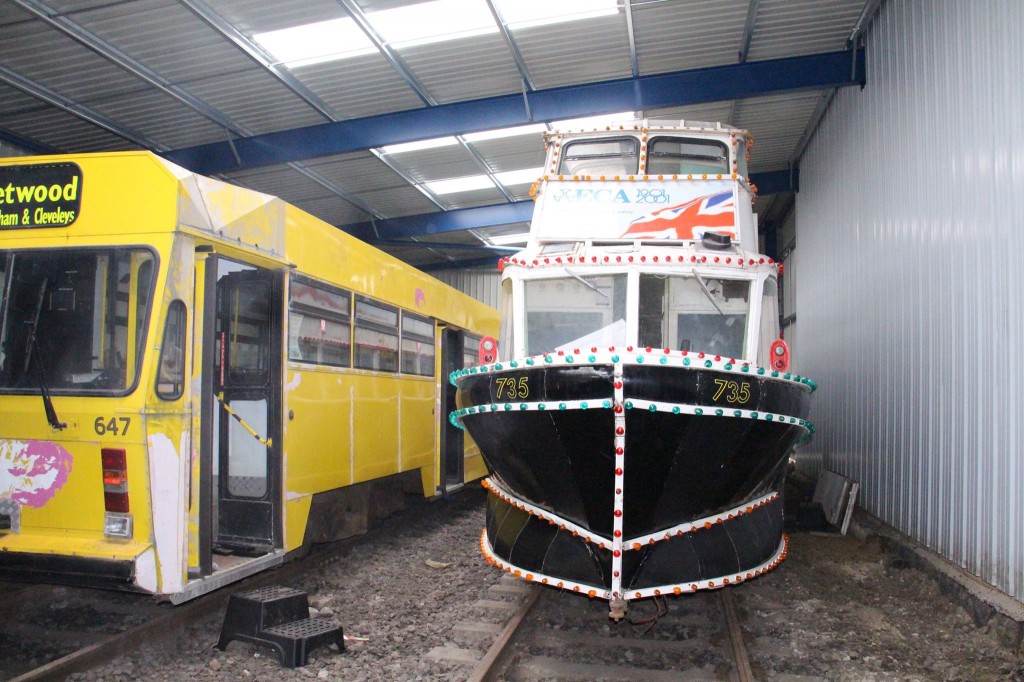 The unique Hovertram is seen in its new home earlier this year, alongside other of NEETT's Blackpool trams - Centenary car 647. (Photo courtesy of the North Eastern Electrical Traction Trust)

1 Response to Helping the Hovertram