A new role for Blackpool Centenary 641

Posted on Thursday 12 February 2015 by Gareth Prior

After three Illumination periods it has been announced that the Fleetwood Heritage Leisure Trust’s Blackpool Brush 290 is to be replaced on the short section of display track adjacent to the Pleasure Beach loop and replaced by Centenary car 641. The Centenary car will redecorated to celebrate the Town’s football history and the FHLT are offering supporters of the Fylde coast’s premier football team the chance to see their names alongside images of some of the club’s favourite players.

Centenary 641 was acquired by the Fleetwood Heritage Leisure Trust at the end of the 2011 season following the closure of the traditional tramway ahead of the upgrade works and since being removed from Rigby Road Depot has been stored out of public view, firstly at Kirkham Prison and more recently at the storage facility used by the Trust at Fleetwood Docks, but all this will change in time for the 2015 illuminations period in partnership with Lightworks.

As is well known 641 finished its operating condition in a plain orange livery following the removal of advertising vinyls and this condition led Blackpool Transport to applying vinyls along the roof boards supporting Blackpool FC. Now the orange (or should that be tangerine?) livery will enable the Trust to use the tram as a basis for celebrating the football side and their historic achievements over the year. Preparations are now at an advanced stage and the final design will feature the heroes of the club’s famous 1953 FA Cup win and Ian Holloway’s Premier League stars.

The Fleetwood Heritage Leisure Trust will be underwriting the costs of the presentation alongside a number of commercial sponsors and supporters are being given their chance to help as well. Areas on each side of the tram will say “We Are All Seasiders” where for a donation of £15 supporters names will be added and on display to the public. More information and how to donate can be found on the Trust’s new website at http://www.tramtalk.co.uk or by picking up a form from the football club shop and ticket office.

The project will be officially launched at Blackpool’s home game with Nottingham Forest on Saturday 14th February and the club will also be helping with images and publicity. The final product will be revealed at a special ceremony attended by past and present players and supporters as part of the “Ride the Lights” event on 1st September 2015.

This project will bring to an end Brush car 290’s three year stay at Pleasure Beach and presumably this tram will now be moved to Fleetwood Docks for storage. During these three years 290 has carried three liveries: Golden Jubilee Gold and White, Inkies Graffiti art and a Half Green/Half Cream hybrid livery.

As well as the project involving 641 the Fleetwood Heritage Leisure Trust are working towards a number of other projects for a wider public benefit. It is eventually hoped that their trams may form part of a themed visitor display in Fleetwood. The Trust are working to secure a site for this objective aided by private companies on the Fylde coast. 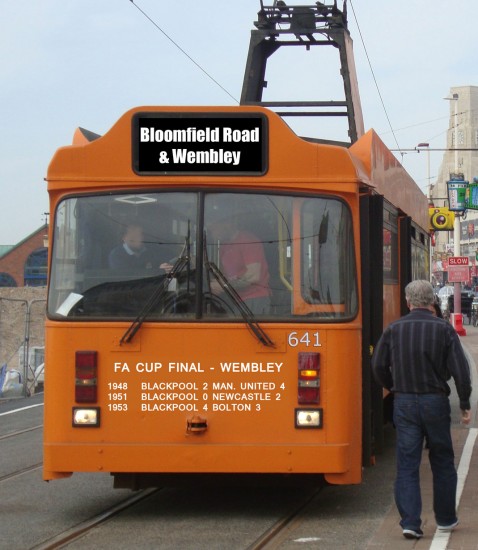 Two artists impressions of how 641 will look when displayed at Pleasure Beach for this years illuminations. (Courtesy of Fleetwood Heritage Leisure Trust)

6 Responses to A new role for Blackpool Centenary 641