Manchester’s Heaton Park Tramway is set to re-commence public operations on Sunday 15th February, after a relatively short winter hibernation. This will be the first chance for members of the public to travel along the heritage tramway in 2015, with Blackpool Vanguard 619 and Manchester 765 both currently available for duty (so if any readers of this website decide to visit, warm clothing is advisable!).

As reported recently, the closed season has been far from quiet with plenty of work going on, including repairs to both Stockport 5 and Blackpool 623 as well as the ongoing major work on Hull 96. Recently a new points lever has been installed and commissioned at the Lakeside terminus; this is a rare working example of this type of mechanism and adds further interest to the line. With stone setts laid around it, this looks very much in fitting with the tramway and helps to make the area around the terminus look more attractive.

The big new project at the park got underway on 10th February, when the laying of Road 1 leading into the Lakeside Depot finally commenced. Confusingly, the tracks into the new depot where laid in reverse numerical order, i.e Road 3 (the one on the right hand side) going in first. Road 1 has been used to store a large selection of spare tramcar parts and other miscellany. This will need to be cleared and re-located imminently, but for now, the priority is to connect the new track up to the existing depot track fan. The trackbed has already been excavated using a small digger, and the first sleepers were laid in situ on the first day of work which bodes well for future progress. The new track will be needed to house Blackpool 680, which is expected to move from Beamish Museum to its new permanent home at the park in the near future. Depending on the completion date of the other vehicle projects being tackled, this opens up the possibility that the tramway could have a record total of six operational passenger trams by the high summer season – further proof of just how much this tramway has grown in stature in the last few years. 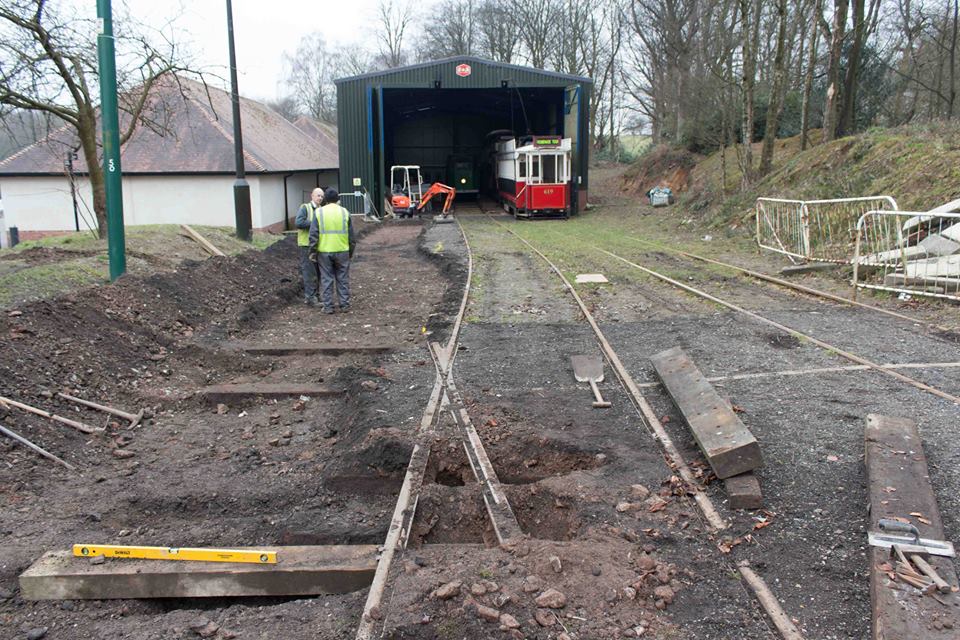 A general view of the work site at Lakeside on February 11th, showing the beginnings of Road 1 leading into the depot itself. Some of the trams on site can be seen in the background, with Blackpool 619 particularly visible here. (Photo courtesy of the Manchester Transport Museum Society)