Balloon 715 set for return to service

Some very good news for fans of Blackpool’s famous double-deck Balloon cars has come in the shape of an announcement by the Blackpool Heritage Trust that Blackpool Balloon 715 is currently in the works receiving some attention which should enable it to return to use this year. 715 was one of several tramcars previously owned by the Lancastrian Transport Trust to be returned to Rigby Road under the care of the new Trust, and looks set to be the second of the former LTT cars to be reactivated following on from Coronation 304.

715 last ran in Blackpool on 6th November 2011 – the last night of traditional tramway operation before the Bombardier Flexity2 trams took over the core service. The tram had actually dodged death a few times before, having been listed for withdrawal as long ago as 2003, but it in fact remained serviceable right until the end of the 2011 season. After being sold to the Lancastrian Transport Trust, it saw only occasional use during 2010 including a few appearances in connection with the 125th anniversary celebrations, but was used more frequently the following year after being repainted in the 1970s style green and cream livery. Latterly deposited in outside storage when the LTT failed to secure any suitable storage accomodation for its collection of trams, 715 was rescued and returned to the sanctuary of Rigby Road in December 2013, showing some effects of its time in the wilderness but still largely intact.

Recent weeks have seen 715 secretly moved into the workshops at Rigby Road to assess its condition with a view to determining the feasibility of returning it to the operational fleet for the 2015 season. Although the tram is showing its age, it was felt that there is still plenty of life in it yet, and therefore some remedial work is now being undertaken to allow 715 to run for a few more years on the heritage tours. This is being done at minimal cost, although in the longer term more comprehensive work will be required. For now, work is including the replacement of several windows which had been smashed by mindless vandals during its time stored outside, as well as repairs to the body panelling. It has not yet been confirmed whether the tram will be repainted fully or merely touched-up, but it is expected that the car will roam the promenade again in this, its 80th anniversary year.

With no disrespect to the superb work undertaken previously on fellow Balloon cars 701 and 717, the return to service of 715 will give us a traditional Balloon car as many of us remember them in the active fleet again – i.e. without its original art deco features, but otherwise in a largely original condition with varnished interior woodwork, swingover seats, half-drop saloon windows and bare bulb lighting. As such the tram should be a popular and useful addition to the pool of heritage trams available for use this season and will provide more incentive for regular visitors to continue supporting the heritage service! With an announcement regarding plans for the heritage fleet’s operation in 2015 expected imminently and a great air of positivity, it is now hoped that this will be a superb year for the classic Blackpool trams and that hopefully previous concerns about their long-term viability on the tramway can finally be laid to rest. 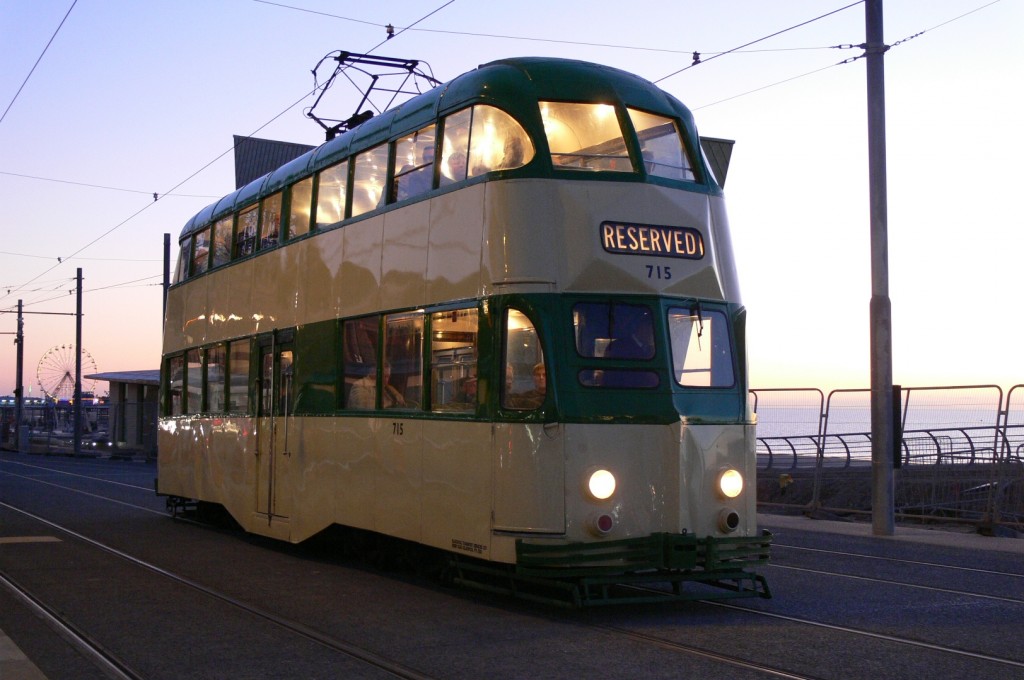 The end of the line for 715 - or so we all thought at the time! The tram is seen at North Pier on enthusiast tour duty on its last day of use in Blackpool before falling on hard times, prior to its subsequent rescue. (Photo by Andrew Waddington)

1 Response to Balloon 715 set for return to service