Posted on Saturday 26 May 2012 by Andrew Waddington

Many people across Great Britain are celebrating the Diamond Jubilee of Queen Elizabeth II in early June, with the late spring Bank Holiday extended by one day to give many workers a four-day weekend. Britain’s tramways have not been left out of this time of celebrating, with two of the country’s most popular museum lines planning special events to mark the occasion, whilst another organisation is actually repainting a tram in a special commemorative livery.

First to announce their plans to mark sixty years since the Queen ascended to the throne, was the Heaton Park Tramway in Manchester. It is planned to have two specially decorated trams in service on Bank Holiday Monday & Tuesday, 4th & 5th June. Stockport 5 will act as the park’s ‘Jubilee tram’ and this is an appropriate choice as open-topppers similar to 5 were often decorated for significant local and national events in years gone by. Blackpool 623 should also be decorated as though celebrating the Queen’s Coronation in 1953, at which time this tram would still have been running in the mainly green wartime livery it carries today. Whilst this will be a relatively modest event by Heaton Park standards, it should create additional interest and will hopefully encourage more people to take a vintage tram ride through the park over the weekend.

Crich Tramway Village have also confirmed their own jubilee event on Tuesday 5th June with a traditional street party set to be held in the recently improved bandstand park area. Some of the attractions from the previous two days’ seaside-themed event will continue and Crich also hope to have a decorated tram in service, although which car will be used for this role has not been confirmed yet. There will also be a special jubilee display inside the Great Exhibition Hall alongside Leeds 602, the 1953 VAMBAC railcar painted in royal purple livery, and it is hoped that visitors may even be allowed to board this tram for the first time since it was withdrawn from service in 2006.  ‘Woodie’s Wings’ are bringing some parrots and owls for display and there will be extra activities for the whole family on offer.

However, it is the Friends of Fleetwood Trams who are going to the expense of fully repainting a tram to mark the Diamond Jubilee year. As reported previously, Blackpool Brush Railcoach 627 is currently at Kirkham Prison where it is receiving a special livery before going on static display for this year’s illuminations. Sadly 627 will not be visible for the actual Jubilee weekend but its return to the promenade, albeit not as an operating tram, will be something to look forward to later on in the year. The car’s owners have kindly sent us a ‘doctored’ image showing how 627 will look on completion of the work, which will also involve the fitting of illuminations and images designed by local schoolchildren on the windows, whose names will also be applied to the roof sides. Bizarrely, the base image used for the design is not in fact one of a Brush car, but appears to be Marton VAMBAC 11 at Beamish Museum! Quite why this was used instead of a more easily obtainable photo of a Brush car is not clear, but the design certainly looks very striking and is sure to lead to plenty of comment when it is finally unveiled to the public. Once the 2012 illuminations are over, 627 is likely to be the first tram to move into the group’s future museum at Copse Road in Fleetwood, although funding for this development has still not been secured. Hopefully the freshly painted tram will not have to endure a period of outside storage once its spell in the limelight is over, but for now at least some positive developments are taking place for this historic tramcar and enthusiats will be able to see it again before too long. 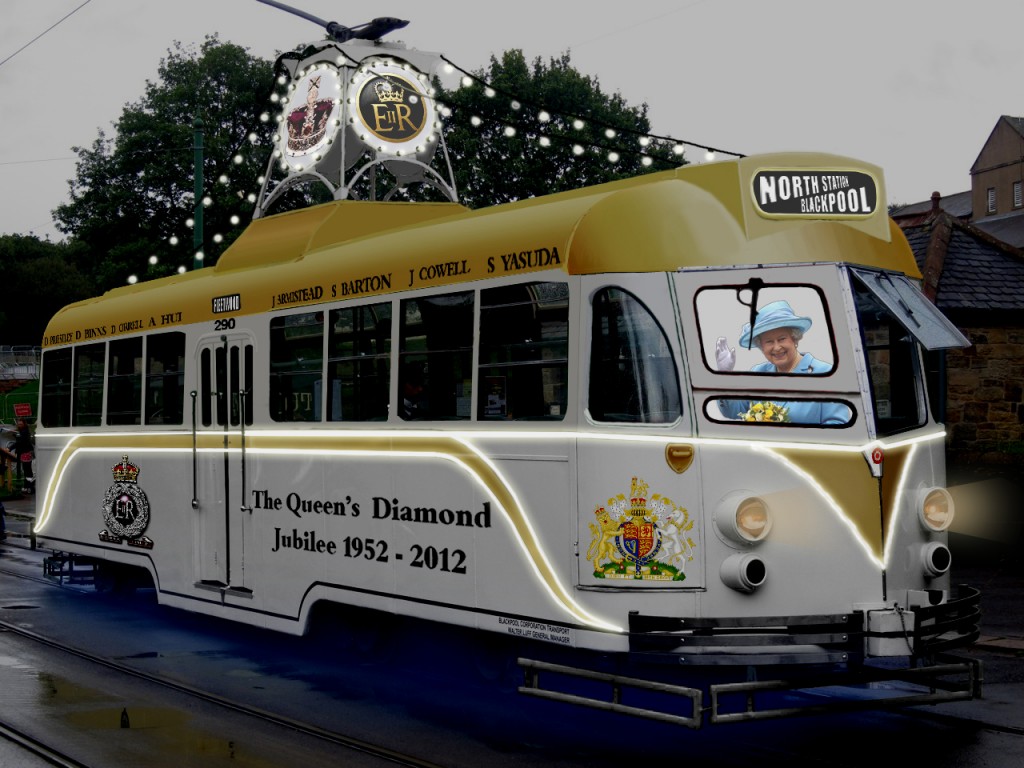 A 'doctored' image released to the press showing how Blackpool 627 will look once completed as the 'Diamond Jubilee Tram'. (Image courtesey of the Fleetwood Heritage Leisure Trust)