It’s that time of the week again (well it’s a day later anyway as I seemed to forget to do it yesterday!) as we round-up just when and where you can ride on heritage trams in the UK and Isle of Man. The end of the 2014 season is now rapidly approaching but that doesn’t mean all the fun has finished just yet! In Blackpool up to five trams a night will be used on the Illumination Tours between 27th October and 2nd November whilst the same week will see the Starlight Specials at Crich with Seaton also getting into the Halloween action. And then as November arrives there will be the Winter Photography event on the Manx Electric Railway.

Operating Hours: Tours start shortly after the Illuminations are switched on nightly (details of times can be found at http://www.blackpooltransport.com/services/illuminations). It is planned up to 5 trams will be used nightly during the October half term week (25th October-2nd November).

Timetable A (4 return trips per day) is in operation on Tuesdays-Thursdays, Saturdays and Sundays until Thursday 23rd October.

Then from Saturday 25th October to Sunday 2nd November Timetable B (7 return trip daily) will be in operation.

Then from Saturday 25th October to Sunday 2nd November Timetable B (services roughly hourly between 1015 and 1545) is in operation. 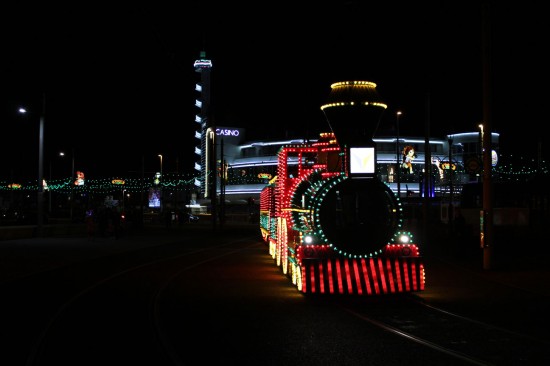 With Blackpool's Illumination Tours about to reach their busiest week of the year we feature Western Train 733+734 on Pleasure Beach back on 28th September 2014. (Photo: Gareth Prior)