Posted on Thursday 9 October 2014 by Gareth Prior

It’s that time of the week again as we round-up just when and where you can ride on heritage trams in the UK and Isle of Man. Highlight of this week looks set to be at Crich where you are invited to join Blackpool 711 to celebrate its 80th birthday party and it should be joined by another eight Blackpool passenger trams in service with the Blackpool Electric Loco also due to be in use on the mainline with Blackpool 49 on static display. And Blackpool will start to be the main focus of our attention for the rest of the month as well with the Illumination Tours reaching a crescendo as the month draws to a close!

Operating Hours: Tours start shortly after the Illuminations are switched on nightly (details of times can be found at http://www.blackpooltransport.com/services/illuminations). It is planned up to 5 trams will be used nightly during the October half term week (27th October-2nd November).

Timetable A (4 return trips per day) is in operation on Tuesdays-Thursdays, Saturdays and Sundays from until Thursday 23rd October. 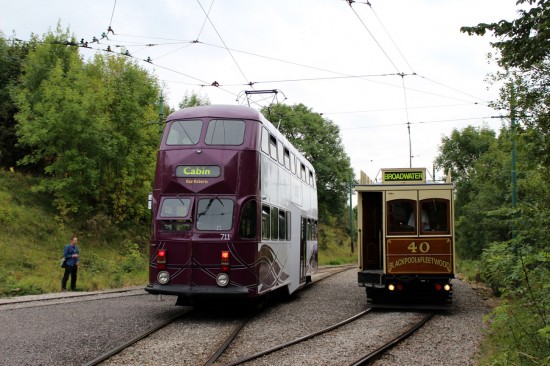 Two of the stars of the show of this weekend's event at Crich are seen here at Glory Mine on 13th September: Balloon 711 (celebrating its 80th birthday) and Box 40 (its farewell appearance at Crich). (Photo: Gareth Prior)