On Sunday 12th October, a special event will be held at Crich Tramway Village to celebrate the 80th birthday of Blackpool Balloon car 711 which is of course currently on loan from Blackpool Transport. The event also takes advantage of the fact that there are currently ten operational Blackpool trams on site, and will including the last chance to ride on Rack 2 for a while and Box 40‘s final appearance in passenger service at Crich before it returns home.

Sunday 12th September. The museum opens as normal at 1000 with the tram service kicking off at 1030. The last tram of the day is scheduled to leave Town End at 1700.

Which trams will be running?

This day should see a very impressive total of nine Blackpool trams running in passenger service – Rack 2, Box 40, Standard 40, Toastrack 166, Pantograph 167, Boat 236, Brush 630, Balloon 711 & Jubilee 762. The Blackpool Electric Locomotive should also be operating during the day and it is planned to offer some cab rides on this tram. Naturally, the use of open cars will be weather dependent but a good number of trams should be in service whatever happens!

Rack 2 is scheduled to leave Town End at 1600 for its final passenger journey prior to being withdrawn for workshop attention. This will then be followed by the final run of Box 40 before it leaves Crich again at 1630; it is pleasing that these two ‘farewell’ trips are timed so that enthusiasts are able to ride on both. The last journey of the day will be performed by Balloon 711 in recognition of its 80th birthday earlier on in the week.

It is hoped to have Blackpool Standard 49 available for display outside the depots (weather permitting). In addition, the depots, Exhibition Hall and Workshop Gallery will all be open as usual enabling visitors to view the vast collection of tramcars from other systems at the museum as well as a couple of other, non-operational Blackpool trams.

What photo opportunities and other events are planned for this day?

Although this event is primarily intended to be a running day for the Blackpool trams, there are a number of planned photographic opportunities starting with the nine service trams being lined up before heading along the street at 1020 for a photo opportunity, ahead of the first tram of the day departing from Town End. There will then be a series of three line-ups arranged between 1030 and 1400 on the depot fan. Weather permitting, these should be as follows:

Other attractions will include a simple birthday celebration for car 711 at 1430, and then at 1515 the electric loco will be demonstrated rescuing a ‘dead’ tram from Town End and towing it back to the depot, which should be an interesting sight!

The normal admission charges will apply for the event with all return entry tickets, membership passes etc. valid as usual. Full details can be found at www.tramway.co.uk

Please note that all advertised events and vehicles are subject to change and that several elements of this event will be weather dependent. British Trams Online will hopefully be present to provide full coverage of what should be a very enjoyable day, and we offer our thanks to Crich Tramway Village not only for arranging this extra event for the late season, but also for supplying this website with a fairly detailed itinerary which has helped with the preparation of this article. 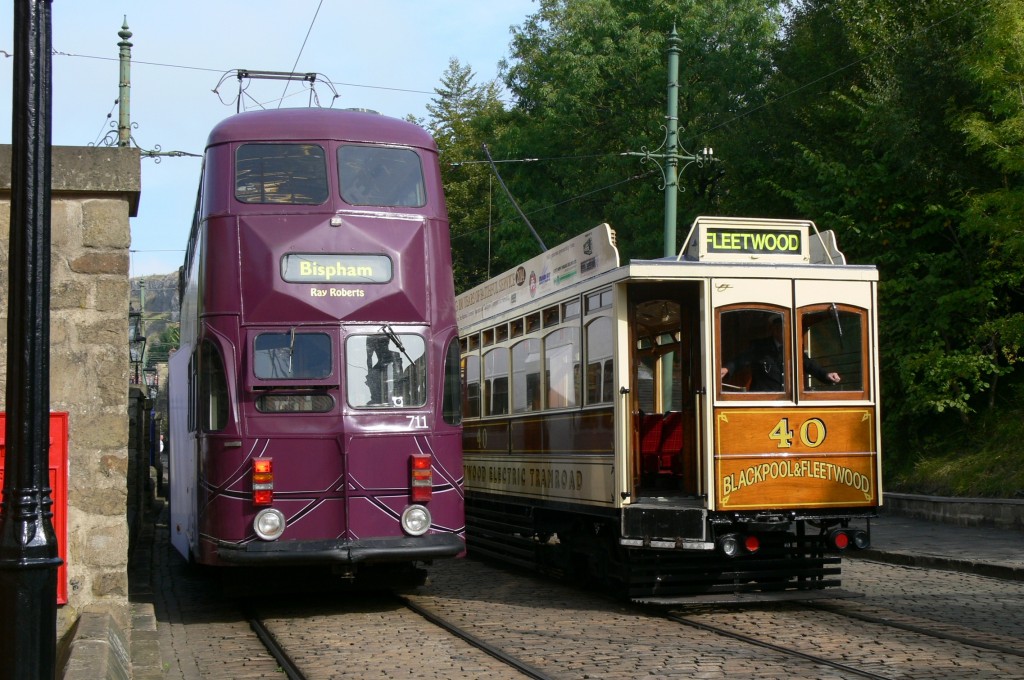 Two of the anticipated stars of the upcoming Blackpool tram event at Crich, both normally based at Blackpool, are Balloon 711 & Box 40. Both are pictured in the main street on 13th September. (Photo by Andrew Waddington)