Posted on Thursday 2 October 2014 by Gareth Prior

It’s that time of the week again as we round-up just when and where you can ride on heritage trams in the UK and Isle of Man. On Sunday 5th October it will be the highlight of the calendar for the Birkenhead Heritage Tramway with the annual Wirral Bus and Tram Show taking place. As always the most intensive tram service of the year will be in place alongside lots of buses. Following on from that the next event will be at the Crich Tramway Village when Blackpool 711 will be celebrating its 80th birthday with its fellow Blackpool trams.

Timetable A (4 return trips per day) will then be in operation on Tuesdays-Thursdays, Saturdays and Sundays from Tuesday 7th October to Thursday 23rd October.

Timetable A (services roughly every hour 1015-1545) will then run on Tuesdays-Thursdays, Saturdays and Sundays from Tuesday 7th until Thursday 23rd October. 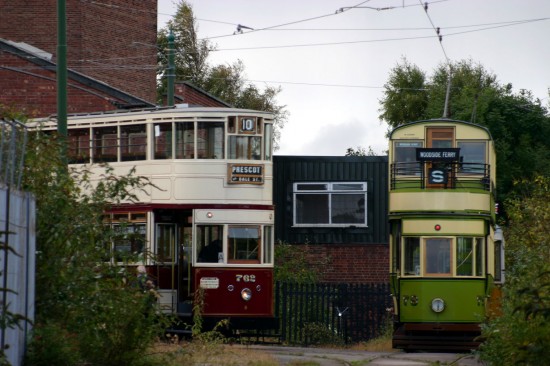 With the annual Wirral Bus and Tram Show taking place this weekend there is nothing more appropriate to show on this page than that very event from 2009. We see Liverpool 762 and Wallasey 78 at Old Colonial in this view. (Photo: Gareth Prior)