Another Urbos 3 arrives as the takeover continues

The takeover on Midland Metro of the CAF built Urbos 3 trams is continuing with this week seeing either five or six of the vehicles in service with Monday 22nd September seeing more than 50% of the service in the hands of the new trams. In addition 30 has become the latest of the trams to arrive at the depot, arriving at 2100 on Monday 22nd September.

30 made the familiar journey from Zaragoza in Spain in two sections before arriving at Wednesbury at 2100 on Monday. The crews then spent the night in their trucks before the tram was unloaded by 1000 on Tuesday 23rd September. It was then reconnected before being moved into the workshops by the Unimog where full reconnection will be undertaken ahead of commissioning and then test running before it can be considered for an entry into service.

Meanwhile this week has seen a step up of the number of Urbos 3s in service and on Monday 22nd September there were more of the new trams out than T69s (it has been said there were seven out although it is thought that 19 was taken out of service early on in the day and for most of the day only five were noted in use). This was followed up on Tuesday 23rd September with five Urbos 3s in service (18, 20, 21, 23 and 24) whilst 19 ran a test run and 17 and 25 were used on alternate short test runs from the depot to the bridge just short of the stop at Wednesbury Parkway. 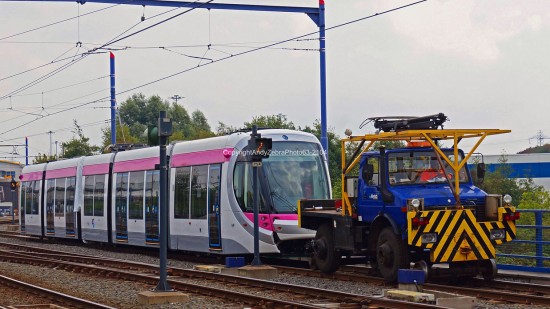 The latest Urbos 3 to arrive in Birmingham, 30, is shunted at the depot whilst being moved to the workshops for commissioning. 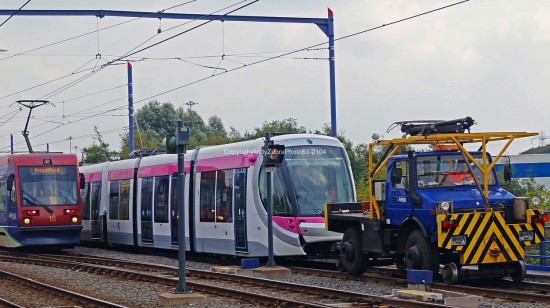 16 passes with a service to Priestfield during 30's shunting. 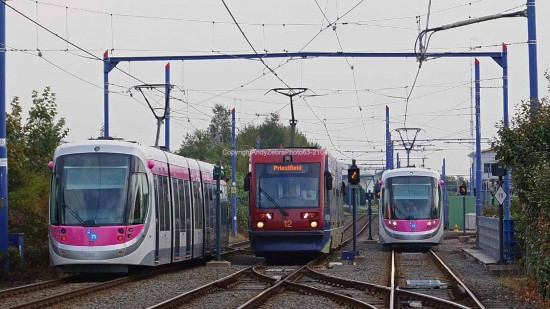 A T69 sandwich at Wednesbury Parkway with 12 in between 23 and 19 on 23rd September. (All Photos: Andy Walters)

6 Responses to Another Urbos 3 arrives as the takeover continues