Posted on Thursday 11 September 2014 by Gareth Prior

So what do our heritage tramways have for you over the next week? Well there is the small matter of the highly anticipated Electric 50 event at the Crich Tramway Village on Saturday 13th and Sunday 14th September where up to 25 trams will be in service (up to 15 at a time) including Newcastle 114, Blackpool & Fleetwood 40, Blackpool 711, Blackpool 167 and the launch into service of Blackpool 762. And if that wasn’t enough for you the three visiting trams will also be in service on Friday 12th September for Electric Friday. Sunday 14th September will also see the last operation of the Douglas Horse Tramway for 2014 with the next normal horse tram service not expected to run until 2016.

British Trams Online will be providing LIVE coverage from both days of Electric 50 at http://www.facebook.com/BritishTramsOnline.

On Saturday 13th and Sunday 14th September a variety of trams will be in use including double decker 18 and children under 16 go free.

There will be additional evening services between Derby Castle and Laxey on Wednesdays 17th September and Fridays 12th and 19th September.

The Blue timetable will be in operation until Sunday 14th September. First tram leaves Seaton at 1000 and then every 20 minutes until 1700, returning from Colyton starting at 1030 until final departure at 1730.

Then between Monday 15th September and Sunday 2nd November the Yellow timetable will be in operation. First tram from Seaton at 1000 and then every 30 minutes until 1600 with returns from Colyton between 1030 and 1630.

There will be evening services (Summit diners only) on Wednesday 17th September and Fridays 12th and 19th September. 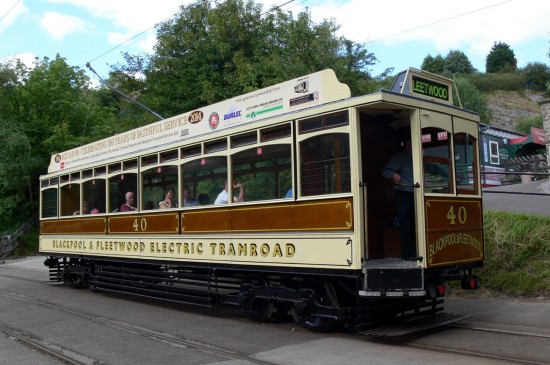 One of the expected stars of the Electric 50 event at Crich this weekend will be Blackpool & Fleetwood Box 40. It is seen here on 3rd August at the Entrance on one of its first days in service back at Crich. (Photo: Andrew Waddington)