Posted on Monday 8 September 2014 by Gareth Prior

For the first since 1959 a tram is going to visit Leeds City Centre, as part of the Light Night Leeds event on Friday 3rd October. The tram which will be making the trip to Leeds will be Manchester 173, the second time this tram will have crossed the border into Yorkshire within a few months, and is another cooperative project between the Leeds Transport Historical Society and the owners of the tram the Manchester Transport Museum Society.

Light Night Leeds takes place across the city centre and features various projects involving light including images being projected onto public buildings. A Latvian artist, Anna Politiko, who grew up to the sound and sight of trams in Riga, has come up with the idea called “The Ghost Tram” which will see images of tram passengers from the 1920s and 1930s projected onto the windows of 173 which will be parked in Briggate.

The plan is that Manchester 173 will make the move across the Pennines on Thursday 2nd October and will then parked on Briggate in the performance area between Commercial Street and King Edward Street. Several projectors will throw the images onto the inside of the windows, which will be specially coated for the event. The actual art installation will be visible during the evening of Friday 3rd October and 173 will then make the trip back home to Manchester on the morning of Saturday 4th October.

The last trams ran up Briggate in March 1959 when the service to Roundhay was withdrawn. The last trams in Leeds City Centre were the ones of the final closure procession on 7th November 1959 and although there were further movements of preserved trams in Leeds out of Swinegate Depot in 1960 none made it into the city centre. 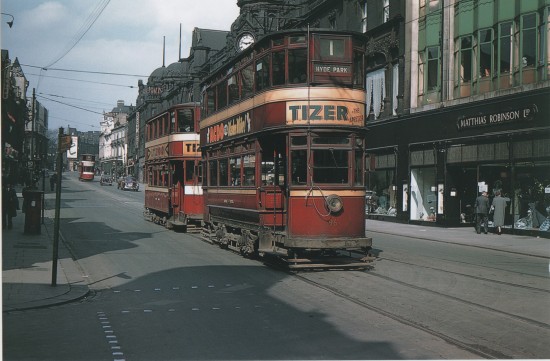 This is almost the exact location where Manchester 173 will be found on 3rd October. Mathias Robertson in the background is now Debenhams. Three trams led by 96 are seen in this view. (Photo courtesy of Leeds Transport Heritage Society)

2 Responses to Tram to return to Leeds City Centre!