Posted on Thursday 21 August 2014 by Gareth Prior

Want to know when and where you ride on heritage trams over the next few weeks? Well if you do you have come to the right place as this is your one stop guide to heritage trams in the UK and Isle of Man! With it being Bank Holiday weekend this week it is set to be a busy time for our heritage tramways with another three days of heritage operation on the Blackpool Tramway and the Classic Transport Gathering at Crich. After that we are nearly in September, a month which is traditionally a busy one for our heritage tramways.

Current Status: Operates every Saturday and Sunday plus Wednesdays, Thursdays and Fridays until the end of the school holidays.

Saturday 23rd-Monday 25th August – a 3 tram service will operate and further details can be found on our preview at http://www.britishtramsonline.co.uk/news/?p=8722.

There will be additional evening services between Derby Castle and Laxey on Wednesdays 3rd, 10th, 17th September and Fridays 5th, 12th and 19th September.

The Blue timetable will be in operation from Monday 1st September until Sunday 14th September. First tram leaves Seaton at 1000 and then every 20 minutes until 1700, returning from Colyton starting at 1030 until final departure at 1730.

There will be evening services (Summit diners only) on Wednesdays 3rd, 10th and 17th September and Fridays 5th, 12th and 19th September. 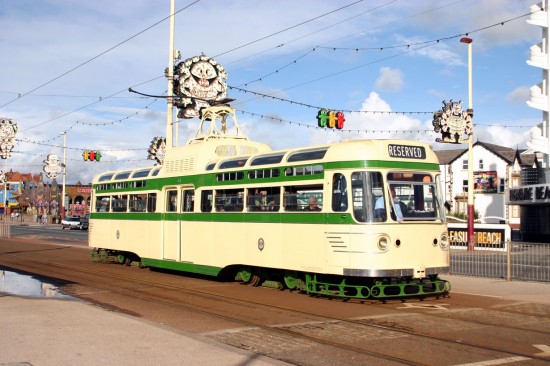 With the news that Blackpool Coronation 304 has been back on the rails in Blackpool this week ahead of a possible use on the heritage service this weekend what more excuse do we need than to show a photo of the tram? It is seen here on 23rd September 2010 (during the 125th anniversary events) approaching Pleasure Beach. (Photo: Gareth Prior)

1 Response to Heritage Trams this week