One in & one out at Starr Gate Depot

Posted on Monday 14 May 2012 by Andrew Waddington

Friday 11th May was yet another interesting day in Blackpool with the arrival of another member of the new Flexity2 class from Germany. 014 had actually touched down on British soil when it had arrived in Hull the previous day, starting the last leg of its journey by road and arriving at Blackpool on the Friday morning. However this wasn’t the most exciting event of the day, as another tram left town on the same transporter.

As is now the established practice, 014 was efficiently unloaded on the promenade using the headshunt, so as not to block the main line which was being used by service cars throughout the unloading process, and the new arrival was then driven into the Starr Gate depot under its own power. However, this delivery was different from the thirteen before it as another tram was then loaded up onto the same lorry! It has been expected for some time that Flexity 002 would be heading back to the Bombardier factory in Germany for some remedial work whilst it is under warranty, and the car duly provided a return load for 014. The tram was soon loaded up but stayed put overnight, before heading back to Bautzen via Hull the next day, where it will join sister cars 015 and 016 which await delivery. Bizarrely, 002 was treated to a wash before it was loaded up – perhaps Blackpool Transport were ashamed of how dirty it had become!?

For the record, 002 first reached Blackpool late last year but it is believed to have carried passengers just once, and has become the last Flexity to run without its full livery branding. Despite this the tram had been a regular performer on driver training duties but has now become the first Flexity ever to leave Blackpool. It is not known for sure what work 002 needs or when it will return, but hopefully by high summer the full total of sixteen new trams will be available for service on the modernised tramway. 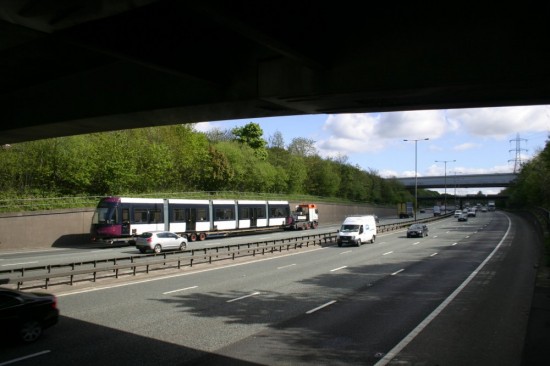 So nearly! 002 is seen here about to pass under the Manchester Metrolink line at Besses o th Barn on its way back to Hull and then Germany, unfortunately for the photographer a Metrolink tram didn't want to play in making this an incredible photo of two different systems in one shot! (Photo: Frank Gradwell)