Want to know when and where you ride on heritage trams over the next few weeks? Well if you do you have come to the right place as this is your one stop guide to heritage trams in the UK and Isle of Man! The next few weeks will see a number of highlights with the heritage trams back in operation in Blackpool again on Sunday 20th July running between North Pier and Fisherman’s Walk, Fleetwood in conjunction with Fleetwood Tram Sunday – this will see the return to the rails of Blackpool & Fleetwood Box 40 after overhaul. Following that between 30th July and 3rd August it will be time for the Isle of Man to take centre stage as the annual Heritage Transport Festival takes place.

The Red timetable is in operation daily from until Sunday 31st August. First tram leaves Seaton at 1000 and then every 20 minutes until 1720 with returns from Colyton starting at 1030 until the last departure of the day at 1750. 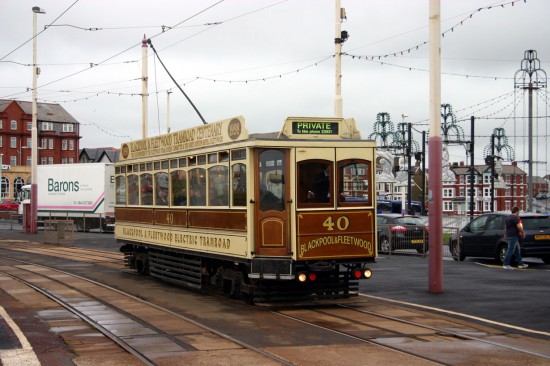 Blackpool & Fleetwood Box 40 is due to return to service on Sunday 20th July following an overhaul over the winter at both Blackpool and Crich. We see the tram here on 29th September 2010 at Gynn Square. (Photo: Gareth Prior)