On Sunday 6th July, a very special event took place at Manchester’s Heaton Park Tramway to commemorate the centenary of Manchester 765. Having been the tram which led to the formation of the Manchester Transport Museum Society and the re-opening of the old Heaton Park branch line as a preserved tramway, 765 understandably has a very special place in the MTMS collection and therefore it was given a fitting celebration to mark this occasion, although the event was also used as an ideal opportunity to showcase the recently expanded fleet of trams at Heaton Park, with an impressive eight different trams brought out during the course of the day.

The day began with the star of the show, Manchester 765, displayed on the approach track leading into the Middleton Road depot. Shortly after 1100, a short ceremony took place with speeches from invited guests and a cake cutting, before the leader of the local council drove 765 to Lakeside under supervision, marking not only its 100th birthday, but also its return to service following workshop attention. By this time, Blackpool Balloon 702 had already been shunted out of Lakeside Depot, and placed on the siding at the old Lakeside terminus where it would remain throughout the day.

Once 765 had returned to Middleton Road end of the tramway, the public service was handed over to Blackpool cars Vanguard 619 and Brush Railcoach 623, allowing the first photo opportunity of the day involving 765 to be set up. Two vintage buses from the Greater Manchester Museum of Transport had been brought over specially to be posed with the tram, and these were later joined by a brand new single-deck bus. All of these vehicles are or were stalwarts of the famous ’53’ route, and 765 was therefore posed with all three of the buses, with all of them displaying matching ’53 – Belle Vue’ destinations to the delight of the gathered throng of photographers. Meanwhile, refreshments were being served to guests inside the old tram depot whilst a visiting artist could be seen working on a stunning painting of a Liverpool ‘Baby Grand’ car outside.

After the ‘Route 53’ line-up had been dissolved, it was time to prepare for the most anticipated event of the day: a display of trams from the Manchester area at Lakeside. For this, 765 was posed alongside both of the open-top trams on site, Stockport 5 and Manchester 173, both of which were dragged outside into the sunshine by car 619 which was temporarily borrowed from service to be used as the depot shunter. As if the sight of the three red trams together was not exciting enough, the same three buses then came to join in, allowing photographers to capture a vast number of different images showing six local vehicles assembled together. The sight of 173 in the open was particularly welcome as this tram has rarely been seen outside before. Despite fears that the forecast rain could prevent this from happening, the whole day was actually gloriously sunny and so the line-up was able to go ahead outside as planned.

After some further shunting, Manchester 765 was temporarily taken out of service again so that it could be decorated with bunting and balloons in recognition of its centenary. It then replaced Blackpool 623 in service, with both this car and 619 proving very popular on this fine sunny afternoon. Meanwhile, at Lakeside, there were further photo opportunities with 5 and 173 staying out, and these were joined by 623 and for a brief time, works car Blackpool 1, before this tram was used for a number of public driving experience trips. However, the biggest surprise of all came when the remains of Oldham 43 were carefully moved out of the depot and into the sunshine for one more fantastic photographic opportunity. Pictures of this tram in service during its heyday were stuck to one side, giving visitors a better idea of how it once looked, and also a taste of how it will appear again at some point in the future. With the service cars mingling with those on static display, Lakeside became a hive of activity with numerous scenes featuring as many as six trams grouped together possible. An even more unique angle was offered as the tramway’s cherry picker was used to provide a novel vantage point for photographers, in return for a modest donation.

Other activities during the day included a pictorial history of car 765 in Middleton Road depot, a display of model Manchester trams and guided tours of the new Lakeside Depot, whilst Balloon 702 was opened up for inspection during the latter part of the day. All of this ensured that this was one of the most exciting and innovative special events ever staged at Heaton Park. With so many contrasting trams now in residence, the potential to create spectacular events of this kind has increased considerably and the day also gave a glimpse into a future where even more of the trams on show will actually be available for operation at the tramway. Not only was Manchester 765‘s milestone anniversary celebrated in fine fashion, but visitors were given a day to remember and an event that is sure to go down as one of the highlights in what is shaping up to be a fantastic year for the UK’s heritage tramways. 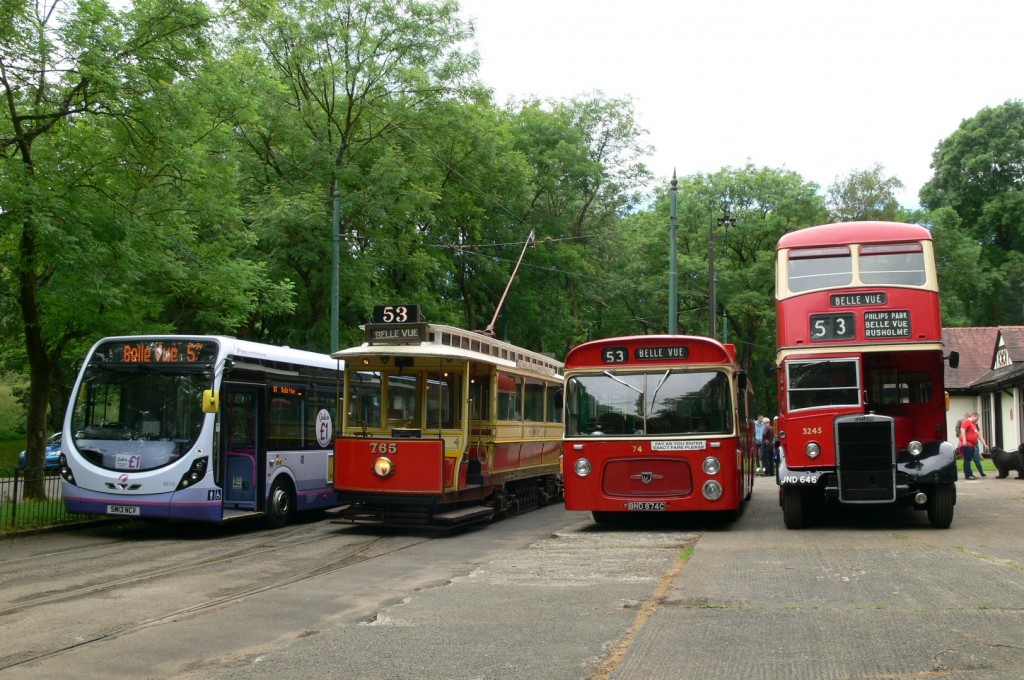 100 years of history as Manchester 765 lines up with two vintage buses and a modern bus, all of which have operated on the local '53' route and are displaying matching destinations. 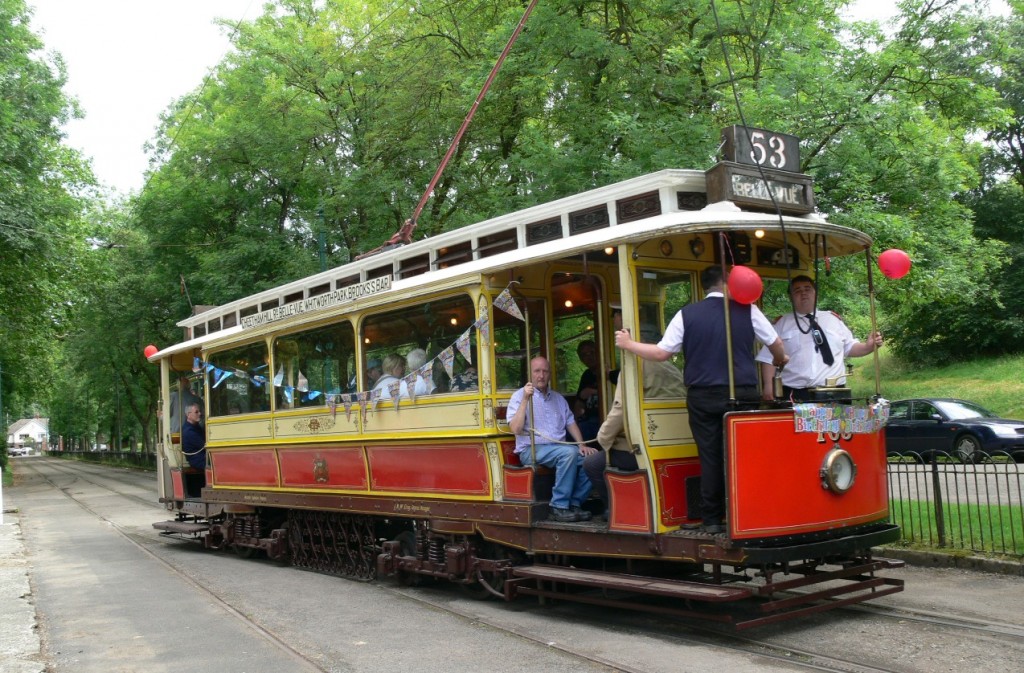 Later on in the day, Manchester 765 is seen on the lower section of the line with its decorations clearly visible. 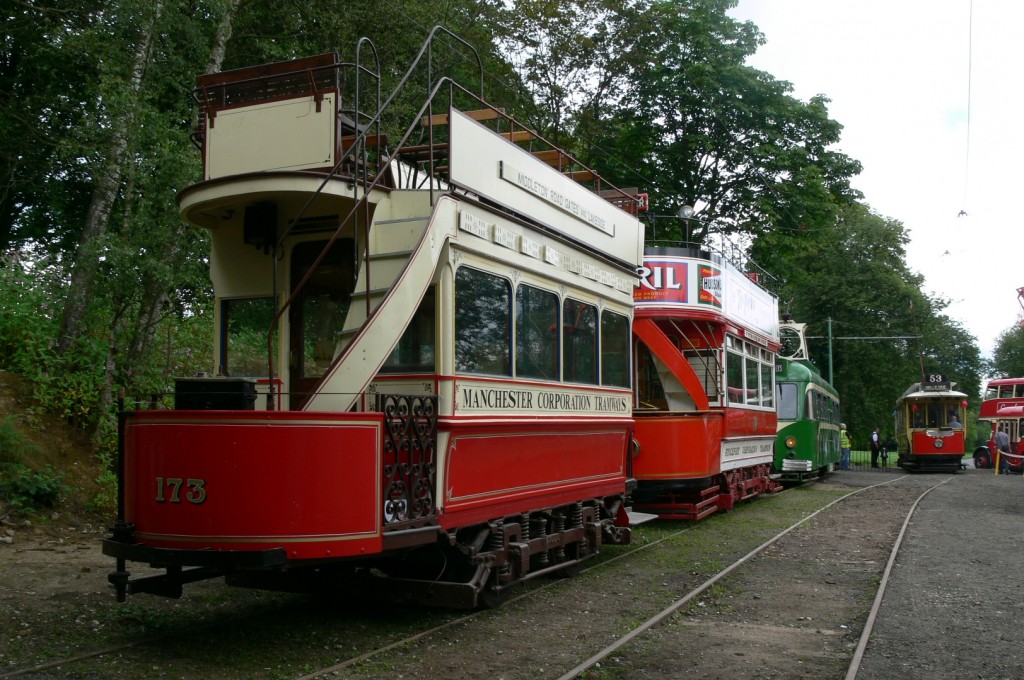 For your writer the chance to see Manchester 173 in daylight was probably in daylight. One of the day's many impressive line-ups is shown here, with 173 joined by Stockport 5, Blackpool 623 and Manchester 765 at Lakeside. (Photos x 3 by Andrew Waddington)

This entry was posted in Feature Articles, Heaton Park Tramway. Bookmark the permalink.