Posted on Tuesday 1 July 2014 by Gareth Prior

Stagecoach Supertram’s 116 has entered service carrying a new all over advertising livery although it isn’t a new livery for Supertram. The tram is now sponsored by East Midlands Trains and carries an almost identical livery to that as on 111, which still remains in service in this guise.

116 previously advertised Genting Club and becomes the third tram to carry an advert for fellow Stagecoach subsidiary East Midlands Trains. It is not known whether 111 will continue to carry its advert livery long-term but it is unlikely anything will happen immediately as the enhanced service on Sunday for the Tour de France is likely to require every available tram.

In another minor change on the destination displays the Blue route trams are now carrying a light blue “B” in their coloured square with the Yellow and Purple route trams seeing a black “Y” and “P” respectively; just what the reasons are for carrying the letters now is not known. The side destinations on the Yellow route are now scrolling the information as per the end screens. 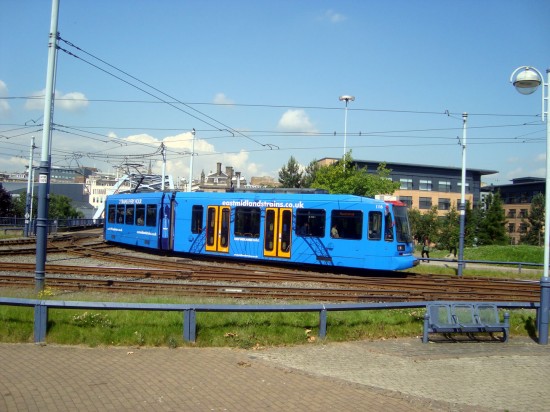 116 passes through the Park Square Junction in its new all over advert for East Midlands Trains. 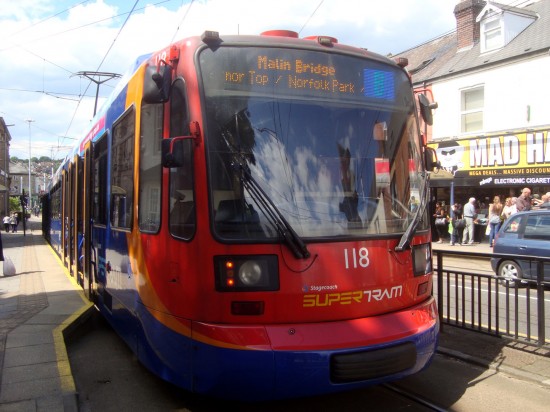 118 shows off the new style route colour with a light blue "B" now visible. (Both Photos: Stuart Cooke)