On Sunday 22nd June, the popular Totally Transport event returns to Blackpool’s New South Promenade for the tenth successive year. Featuring a wide variety of vintage transport plus other attractions to entertain the whole family, this year’s event will see heritage trams operating through the heart of the event for the first time in a number of years, providing the first chance to ride on a heritage tram to Starr Gate since 2009!

The section of tramway between Starr Gate and Pleasure Beach has gained cult status amongst tram enthusiasts since the upgrade to light rail standards, as heritage cars have generally only run along this stretch out of service. This will change on 22nd June when a special heritage service is due to operate to the southern terminus for the only time this year, and more details of this event are provided below.

Totally Transport takes place on Blackpool’s New South Promenade on Sunday 22nd June between 1100 and 1600. The heritage tram service is scheduled to operate between Starr Gate and North Pier between approximately 1020 and 1700 with a total of five different trams expected to be used during the day.

Subject to availability, it is planned to have a three car service with a number of swaps enabling the use of up to five heritage trams. The star of the show will be visiting ‘Pantograph’ car 167 which should be in service throughout the day. Initially 167 will be joined by Standard 147 and Boat 230; after lunch these are due to be swapped for Bolton 66 and Boat 600. Please note that all trams are subject to the usual caveats such as availability and weather, and enclosed cars will be on stand-by to replace the Boats in the event of rain.

The trams listed above are expected to mainly run between Starr Gate and North Pier providing a twenty minute frequency. Passengers can board and alight at temporary ‘heritage’ tram stops at Harrowside (directly opposite the Solaris building, where the event is based) and on the main line at Pleasure Beach, as well as North Pier. Unfortunately it will not be possible to get off the trams at Starr Gate so as not to unduly delay the core service, but passengers can stay on board the trams as they reverse there, and of course the usual Flexity service will also be operating along the entire length of the Blackpool tramway for anyone wishing to alight at this location.

As an added bonus, car 167 will perform a special tour to Fleetwood, departing from Harrowside at 1620, with an anticipated return to Pleasure Beach for 1810. Due to expected high demand it will be necessary to pre-book a place on this trip and details of how to do this will be announced shortly.

What other attractions will be on offer?

As always, there is much more to Totally Transport than just trams, with the road along New South Promenade closed to allow a varied selection of historic vehicles to be lined up for display. There will also be trade stalls and a model tram exhibition at the Solaris complex located opposite the giant mirrorball, and this will be served by a temporary heritage tram stop. Family entertainment will also be provided on Solaris Green. The Lancastrian Transport trust will be providing a free service using some of their vintage bus collection starting from the Solaris, and other preserved buses will be used on the Seafront 12 service between Starr Gate and Cabin.

The Totally Transport event itself is completely free. Normal fares apply on the trams, with a day ticket covering the heritage trams as well as all other Blackpool Transport bus and tram services costing £10 for adults, £5 for concessions and £20 for families of 2 adults and up to 3 children. This also covers the afternoon Fleetwood tour with 167 although as explained above, anyone wishing to ride on it will need to reserve a seat in advance. One round trip between Starr Gate and North Pier will cost £2.50.

What coverage will be online?

Please note that the above information is all provided in good faith, however changes to the advertised vehicles and events may occur if necessary and neither this website, Blackpool Transport or the event organisers can be held responsible for any such changes to the programme. 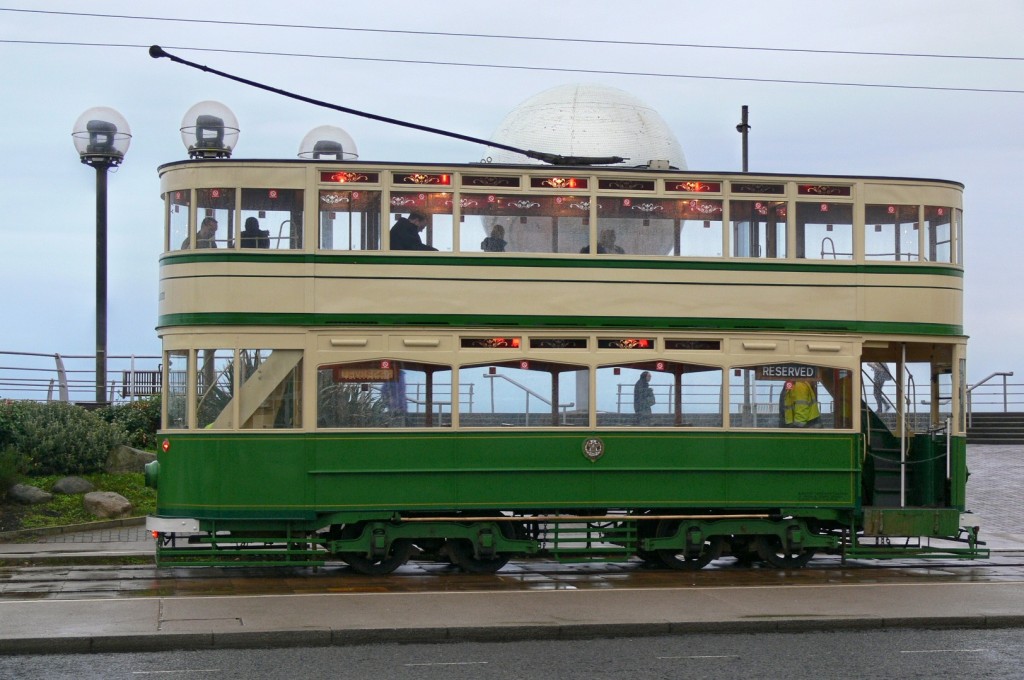 Apart from the occasional private charter, the last time traditional trams carried passengers along New South Promenade was during September 2009, making their operation on 22nd June particularly noteworthy. This classic image shows Standard 147 at Harrowside on the final evening of a full tram service to Starr Gate before this section of the line closed for upgrading. (Photo by Tony Waddington)