Posted on Wednesday 28 May 2014 by Andrew Waddington

Spring Bank Holiday Monday, 26th May was a milestone day in the history of Manchester’s public transport, and indeed the history of British trams in the general, as it marked the final operation of one of the original batch of light rail vehicles purchased to inaugurate the Metrolink system. The T68 class are generally considered to have been the first modern trams to run in the UK, and after just over two decades, their time of serving the people of Manchester came to an end on this day with a special enthusiast tour.

Despite a fairly high £20 price tag, tickets for the last ever journey on the Metrolink network by a T68 were snapped up extremely quickly, resulting in a coupled pair of the trams running full up for the event. Cars 1007 and 1016 were chosen to perform this historic journey, and had been prepared for their final day in the limelight ahead of the event itself. Notably, 1016 was adorned with a special ‘Farewell T68’ plaque, whilst 1007 wore traditional Manchester Corporation lettering, just as it did when it was the first of the new generation trams to operate through the city centre back in 1992. The latter was also sporting Heaton Park Tramway logos, in recognition of its future home as the very first of Britain’s second generation trams to find sanctuary in preservation. Both cars also displayed ‘T68 Special’ on their electronic destination screens, to add to the uniqueness of this occasion.

The duo began the day loading their eager passengers at Piccadilly, before going on to visit Eccles, Bury, Altrincham and MediaCityUK – all favourite haunts of the T68 class during their working lives. A number of photo stops were arranged en route to the delight of ticketholders and the other well-wishers who had come to witness the last ever appearance of one of these trams in the city centre. One particularly notable event took place when the convoy halted at the stop closest to Heaton Park, and their passengers were encouraged to disembark. There, 1007 was officially handed over to its new custodians, the Manchester Transport Museum Society, with Alderman Keith Whitmore formally accepting the tram from representatives of Metrolink on the Society’s behalf, with several other Committee members and volunteers from the MTMS also present to witness this milestone event.

The pair concluded their final duty with one last run to Piccadilly, before returning to Queen’s Road depot empty for the last time. There, 1007 will await arrangements to be made for its transportation to Heaton Park, where it will ultimately join much earlier Manchester tramcars 173 and 765, enabling the MTMS to represent more than a century of local tramway history in their museum fleet. For 1016 the future is much less certain; although it is believed that another T68 is earmarked for preservation at an unknown museum, its identity has not yet been announced so it remains to be seen whether 1016 will live on or join the vast majority of its sisters in being cut up for scrap.

Whilst the Metrolink trams are certainly not everyone’s cup of tea, they have undoubtedly played a massive role in British tramway history and set the ball rolling for a whole new era for tramways in the UK which led to the opening of new systems in Sheffield, Croydon and Nottingham amongst others, whilst also paving the way for the Blackpool tramway to be brought up to modern standards with a new fleet of articulated LRVs. They may not be the most attractive or reliable of trams, and their lifespan was somewhat shorter than originally anticipated, but they have done a good job for over twenty years and therefore it is good to know that they will be represented in preservation. Thank you and goodnight to the T68s, and perhaps one day we shall be able to ride on one again through Heaton Park!? 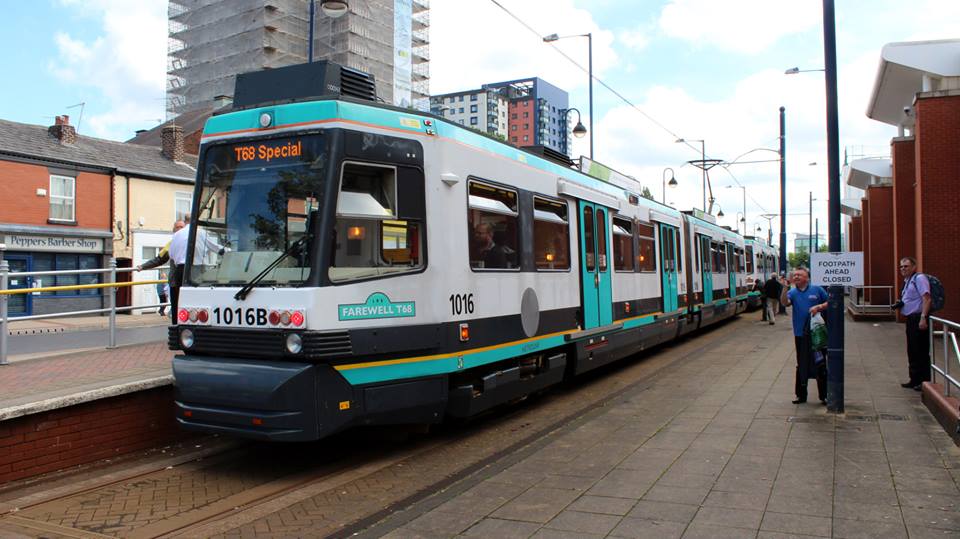 T68 1016 shows off its special 'Farewell T68' stickers and destination displays on its final day out on the Metrolink network. 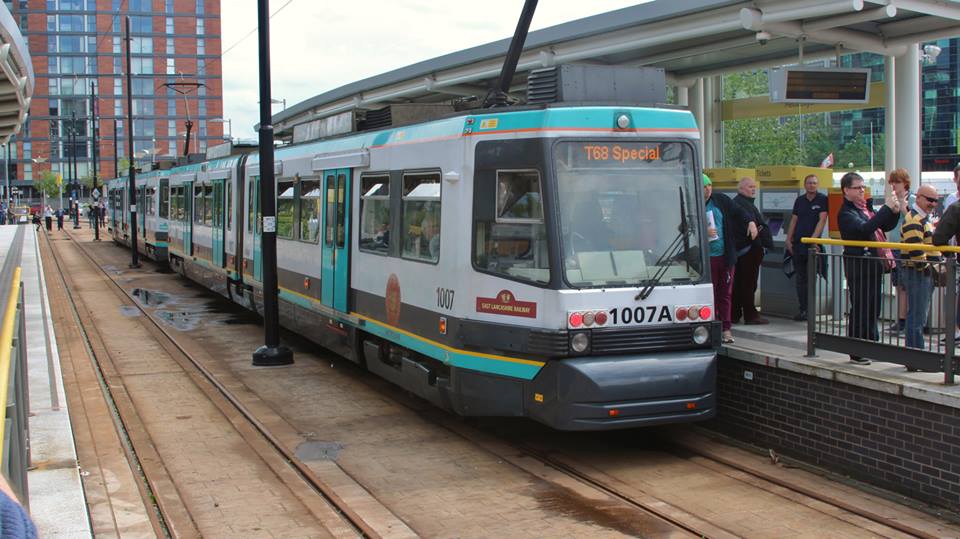 Another view of the T68 convoy, this time with 1007 dominating the scene. Its Manchester Corporation crests, specially applied for the farewell tour, can be seen on the side panels. 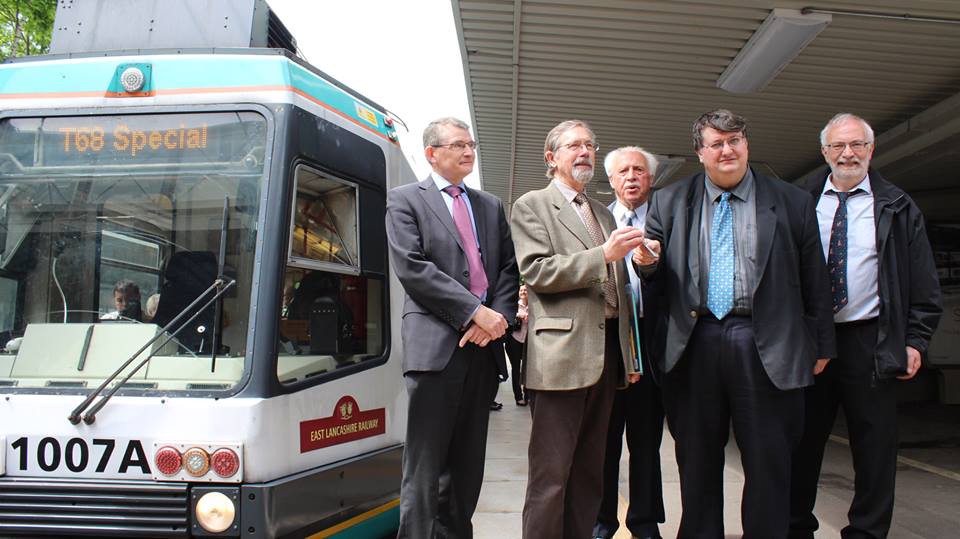 A group of dignitaries stand proudly next to 1007 as the tram is handed over by Metrolink representatives to its new owners, the Manchester Transport Museum Society, for preservation at the Heaton Park Tramway. 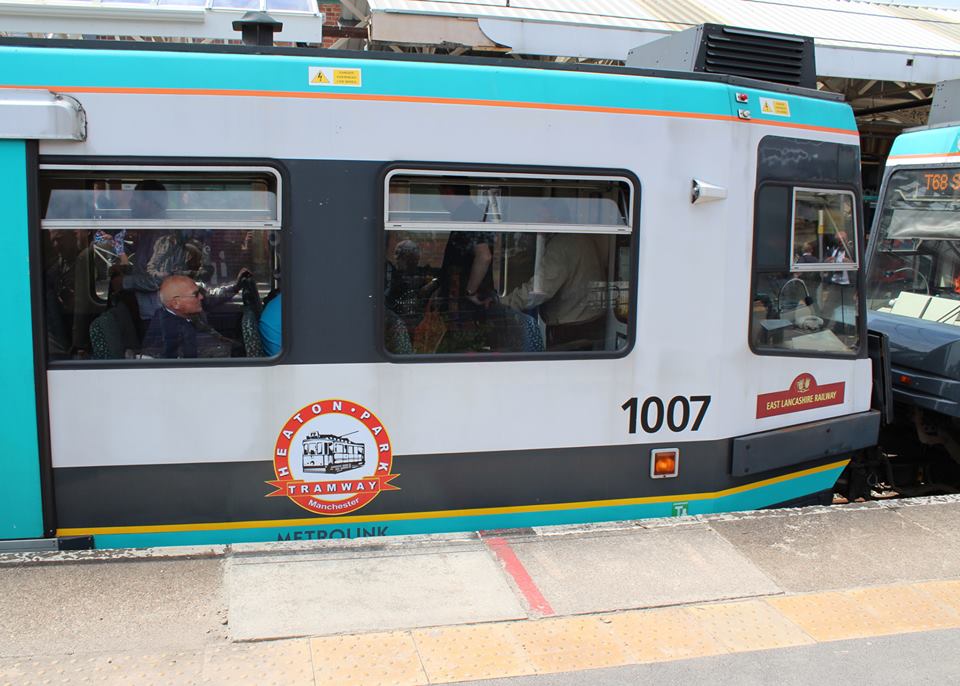 A Heaton Park Tramway logo applied on the side of 1007 gives little doubt as to the intended destination for the first preserved second generation tramcar in Great Britain. (All photos by Joe Savage)

This entry was posted in Heaton Park Tramway, Manchester Metrolink. Bookmark the permalink.

14 Responses to A fond farewell for Manchester Metrolink’s T68s