Posted on Monday 12 May 2014 by Andrew Waddington

The Tramway Museum Society has turned down the offer of a substantial bequest to be spent on fully restoring Leeds 602 to an operational condition. Last year, a TMS member who was actively involved in the initial preservation of 602 back in 1960 very sadly passed away, leaving a legacy of around £250,000 to the Society to enable its restoration to a pristine condition. However, after much discussion and a ‘Condition Survey’, the TMS Board decided not to accept this very generous offer, as 602 is to be conserved in its current condition instead, and is therefore set to remain as a static exhibit indefinitely.

As many readers will know, Leeds 602 is the only representative of a tramcar fitted with VAMBAC control equipment in the National collection, and one of only three in existence in the world today. Of the three, 602 is the only one that has not received significant alterations since entering preservation, and as it is also considered to be the only all-electric tramcar to have run in what the Museum refers to as ‘the first generation period’, it has been decided that it should be conserved as it is. Although the tram has been overhauled at least twice at Crich, it is believed that a large proportion of the original vehicle remains intact. The Museum’s Tramcar Conservation Committee therefore decided that, to carry out a major restoration would involve destroying what remains of the original tramcar, and due to its historical significance it was felt that it is worth more in its present form than it would be as a restored working exhibit. Following this recommendation, a majority vote by the TMS Board of Management agreed to reject the legacy and not to go ahead with the restoration plan.

Predictably, this decision has proved to be highly controversial, and the fact that details of the the TMS failed to release their own official statement before the news became public knowledge has not helped matters. Whilst the policies described above are certainly not unique to Crich, concerns have been expressed at a number of contradictions: similar concerns have recently been expressed regarding the decision to restore London County Council 1, a tramcar which has never run at Crich and has only ever been repainted since it last ran in revenue earning service before it became a museum piece. It was argued at the time by the Museum Curator that the main role of the National Tramway Museum is to preserve trams to represent how they appeared in their heyday, and that retaining the original materials used in their construction is not a priority, so long as it is reasonably possible to replace like with like. If this is the case, then surely the same applies to 602 as well? Another argument put forward is that LCC 1 needed to be fully rebuilt to save it from disintegrating, as its condition has deteriorated significantly since it came to Crich. Although Leeds 602 is in a far superior condition, one could question how long this will be the case for? Incidentally, if the TMS wish to conserve trams in ‘as withdrawn’ condition then it has turned its back on an ideal opportunity to do so by operating the recently retired Blackpool cars acquired in the last few years. The only exception is of course Blackpool Balloon car 249, but with visitors able to board the car and inspect its lower deck interior, the deterioration process will surely accelerate.

The Crich museum was originally intended as a safe haven for displaced tramcars, where they could be demonstrated to the general public for the benefit of all. It is highly debatable how much the public will benefit from a tram such as 602 being conserved to protect its originality, and certainly opens up questions regarding the museum’s future direction. The fact that another legacy, to be used to finance the construction of a replica Manchester ‘Standard’ tram, was recently accepted by the Society is another major bug bear for many members as such a project would represent a major shift in direction for the museum, yet this funding was accepted with grateful thanks without the membership being consulted. Although no solid proof exists, many people believe that other factors have influenced the decision regarding Leeds 602, and a common viewpoint is that the running fleet at Crich is becoming increasingly biased towards durable workhorses that are easy to maintain and operate. This would certainly explain the decision to operate the recently acquired Blackpool trams, and would leave a highly complex tram such as 602 without a role in the operating fleet.

Another concern is that, over the years, people have often questioned why certain trams in the national collection do not run, or are seemingly not considered for workshop attention. The answer from TMS members is invariably along the lines of – “find us £250,000 and we’ll restore it” – which is exactly what this late member has done for his favourite tram, and has achieved absolutely nothing by doing so. Perhaps understandably, a few representatives of other museum tramways are more than a little unhappy with the situation, and cannot help but wish that the money had been sent in their direction instead.

It would therefore seem that Leeds 602 is destined to spend the rest of its day in the Exhibition Hall unless the recent decision is ever reversed – and if this happened, would anyone seriously consider stumping up the required cash, knowing full well that it had previously been available but was not wanted? The moral of this story seems to be that, if you are planning on leaving a large sum of money to a preservation society for a specific purpose, make sure it is a project they actually want to carry out beforehand, otherwise there is a risk that your generosity may be in vain! Another possible viewpoint – which is the one held by the author of this article – is that an organisation that can afford to turn down £250,000 probably doesn’t deserve to be left money in a will, and that there are plenty of other tramway preservation groups who would put such money to excellent use which are more worthy of supporting instead!

Please be aware that the opinions expressed in this article are solely those of the writer. Comments on this topic are welcomed, but please do not resort to personally attacking individuals, and be aware that any such posts will be deleted in accordance with the guidelines of this blog. 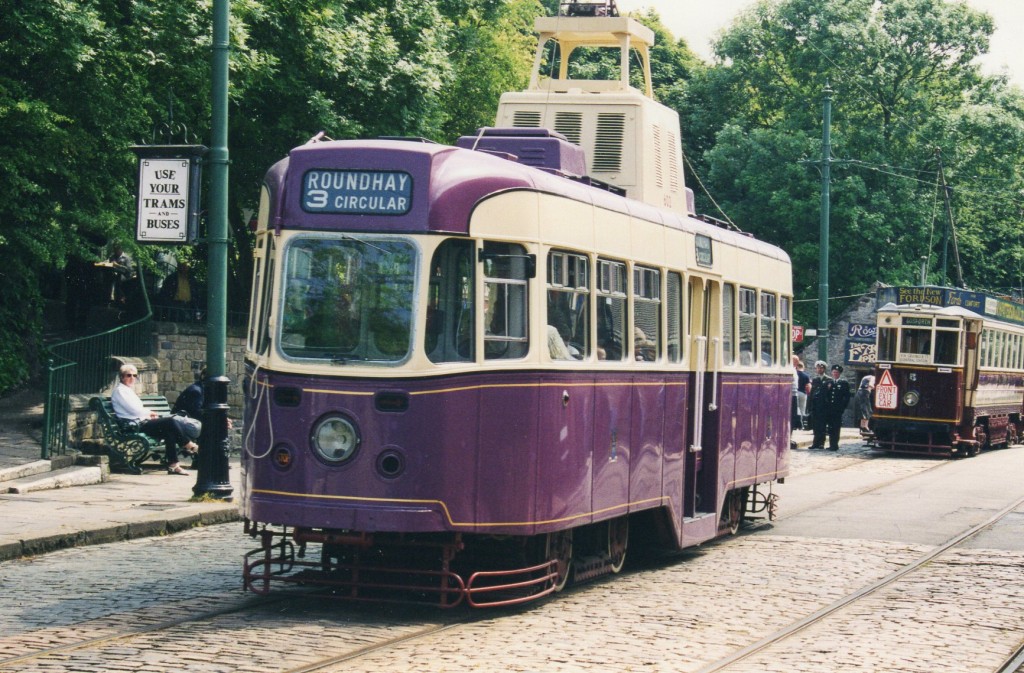 Seen in happier times, Leeds 602 is shown in service at Crich in 2003, when it was reinstated to traffic to mark its 50th anniversary. A few years later this beautiful tram was withdrawn and now appears destined never to run again. (Photo by Tony Waddington)