The Tramway Museum Society have announced that Blackpool & Fleetwood ‘Box’ 40 will be returning to Crich for a major special event in 2014, celebrating 50 years of electric tramcar operation at the museum. The car – which remains owned by the TMS despite being based at Blackpool – has been revealed as the star attraction at the ‘Electric 50’ event on September 13th and 14th, which will quite incredibly be its first stint of service at Crich since 1965!

Car 40 was one of the first trams to run at Crich, and was initially tested using battery power prior to the inauguration of the public electric tram service in 1964. However, after only a couple of years the tram was withdrawn from use and has not run there since, although it did enjoy a period of operation at Heaton Park, Manchester in the 1980s. Since then it has become a popular member of the heritage tram fleet in Blackpool, and its current visit back home stretches back to 1996. However, due to its significance in the early history of the Crich museum, it has been decided to temporarily return it to Derbyshire late next summer, to participate in what has been billed as a spectacular event which will hopefully feature twenty-five trams operating across two days. By a happy coincidence, ‘Box’ 40 will also be one hundred years old in 2014, providing the ideal opportunity for a double celebration!

Having not received any major workshop attention for many years, it has been decided to carry out an overhaul on the 1914-built veteran and so, before it hits the road again, it will be treated to some bodywork and electrical attention in Blackpool Transport’s workshops in the near future. Meanwhile, the bogies will be overhauled at Crich as the TMS’ commitment to its long-term future. Once the work is completed, 40 should be available for use at Blackpool in the early part of the summer before travelling to Crich for its moment of glory later on in the year. It will then return to Blackpool and remain on long-term operating loan there. A number of sponsors have apparently agreed to contribute towards the work on the car, although their identities have not been revealed as yet.

Crich may often receive criticism for some of its events; however the visit of ‘Box’ 40 looks almost certain to be one of the biggest tram-related highlights of next year and should ensure that the tram celebrates its one hundredth year in fine fashion, whilst also helping the museum to suitably mark an important and impressive achievement in its history. 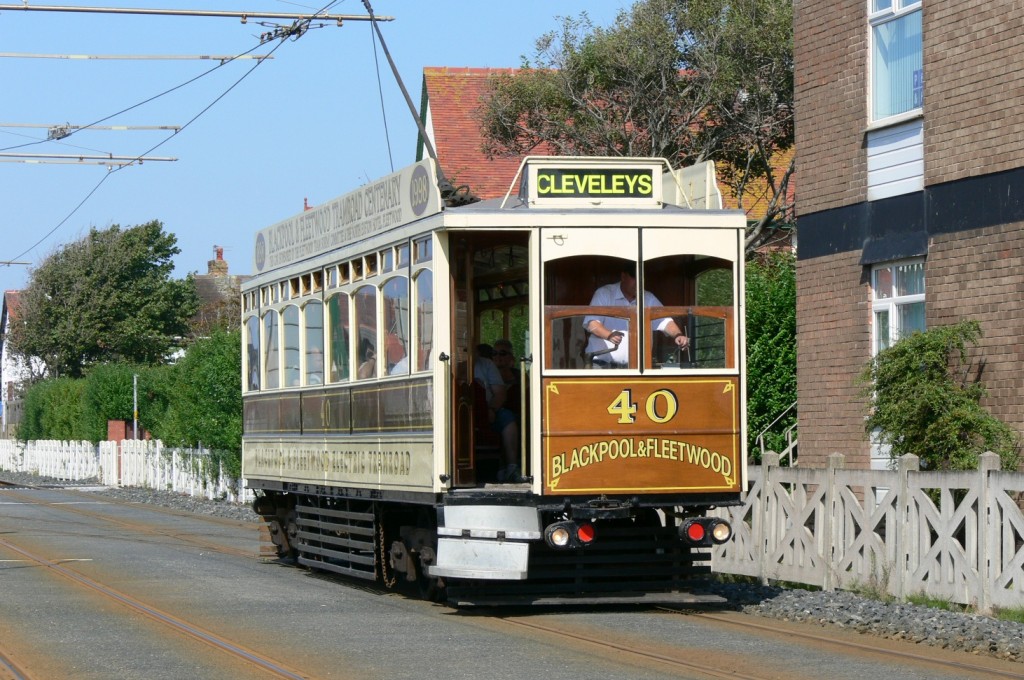 'Box' 40 seen in more familiar territory - Cleveleys to be precise - on its last day of use during 2013. When the tram reappears next season it should be in pristine condition, ready for one of the most exciting years of its long and eventful career. (Photo by Andrew Waddington)

4 Responses to ‘Box’ 40 set for brief return to Crich