Stockport 5 brought the curtain down on the 2013 operating season for the Heaton Park Tramway, with the final passenger journey of the year on Sunday 24th November. Blackpool 623 and Manchester 765 were also used on this day, meaning that all three available trams were running.

2013 has seen the same three trams operating throughout the year, with 765 on restricted use, leaving cars 5 and 623 to operate most of the journeys. The year started well with Stockport 5 re-entering service at the tramway’s Spring Gala on 24th March following a winter refresh, which included the application of period style adverts on its decency panels which greatly enhance its appearance. Unfortunately plans for this tram to visit Beamish Museum as a swap with Blackpool 31 failed to happen due to transportation issues, although this temporary exchange is now scheduled to take place in spring 2014.

Ex-Blackpool Vanguard 7/619 remained in outside storage at the park throughout the year, and was joined on 4th April by Leeds 6 which had spent the previous three years at Beamish. Instead of being prepared for service, the opportunity has been taken to carry out a body overhaul on this car and therefore apart from a single private hire, it has not yet carried passengers since its return. The car is set to be repainted this winter and should emerge looking immaculate in its earlier guise as Hull 96 next year. The collection of trams on site was boosted again on 23rd July, when Blackpool works car 752 returned from outdoor storage at Bury. Despite its shabby exterior, no time was wasted in commissioning 752 which has proved invaluable in assisting the volunteer track gang with the current works at Lakeside. Although it is unfortunate that so many trams are having to be stored outside, this situation should thankfully soon be a thing of the past.

Another tram move during 2013 involved Blackpool Balloon 708, which left Bury in July for a new home at the North East Land, Sea & Air Museum – leaving sister car 702 as the sole tramcar at the East Lancashire Railway. Another Blackpool tram, Railcoach 680, will also be on the move soon as it heads to Beamish Museum for an operating loan over the winter period, before it finally arrives at Manchester next year. Another major development in 2013 was the acquisition of the remains of Oldham 43 by the Manchester Transport Museum Society, following many years spent on a farm, and this tram will also hopefully arrive at Heaton Park in 2014 as a future restoration candidate.

However, the big news of 2013 was undoubtedly the construction of the tramway’s second depot, close to the present terminus near the park’s boating lake. After a few delays, work got seriously underway during the summer and since then progress has been nothing short of amazing! Although the lower block work remains to be completed, the structure is now virtually complete and the first of three tracks has already been installed within. Work has recently begun on laying a second track into the new building, and the installation of overhead wires has also been started. Lakeside Depot is expected to be completed over the winter months, ahead of a proper opening ceremony early next year, and this will allow all of the trams on site and several others to be housed securely undercover, as well as enabling the MTMS to expand their operational fleet. With such a massive achievement under their collective belt, volunteer members of the Society could be forgiven for taking some time out to bask in their success, but instead a hectic programme of work is in the pipeline for the months ahead to ensure that the tram fleet look their best next year. With a new depot, more trams than ever before and a few exciting events being planned, 2014 is likely to be the tramway’s best year yet and should ensure that all of the past year’s hard work by a small but growing team will be rewarded. 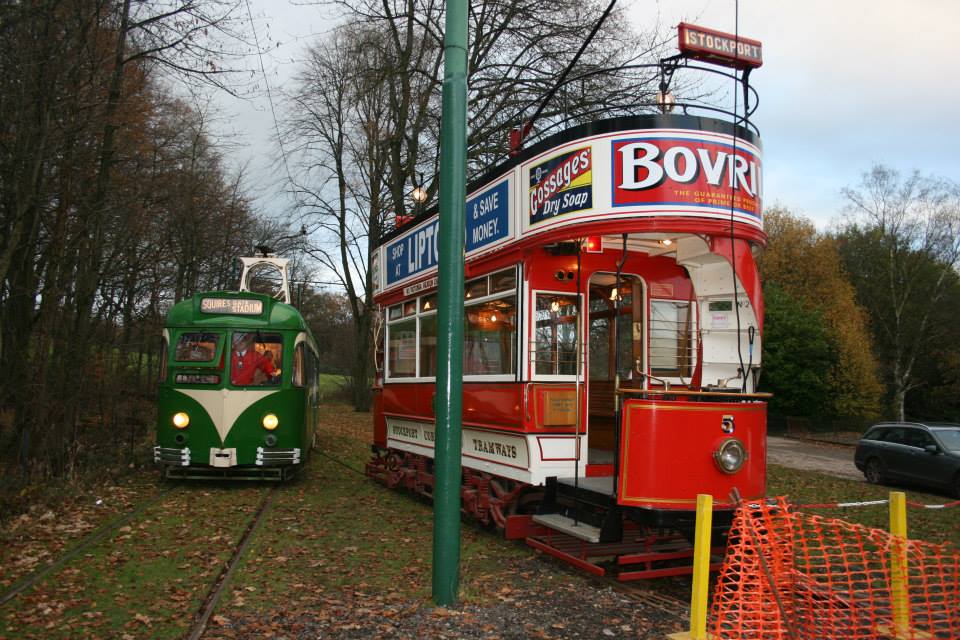 Stockport 5 and Blackpool 623 were the two main service cars at Heaton Park during 2013, and appropriately both are pictured at Lakeside on the last operating day of the year, Sunday 24th November. (Photo by Chloe Pitcher)