Preston Trampower project “did not work out”

It appears that the latest plans by the Trampower consortium have fizzled out, with proposals for a new demonstration line at Preston seemingly having been axed. The organisation’s website has now been taken offline, with anyone attempting to view it now greeted by a message explaining that the account has been suspended due to unpaid web hosting fees. It is understood that the whole idea has now been dropped by the founder of Trampower.

There has been considerable discussion on the Preston Trampower scheme at www.railforums.co.uk which has unearthed some interesting snippets about the project. A forum member who reportedly attempted to register with Trampower to receive news updates on the project by email has reposted a message from its founder, stating: “I’ve given up. Sorry it did not work out”. It is quite remarkable to see such an ambitious project end in such understated manner, whilst the use of the word “I” – seemingly suggesting one person was solely behind the scheme – is also noteworthy!

The original proposal involved a light rail scheme linking Preston’s railway station with Fulwood Junction 31 on the M6, powered by renewable energy sources, with further expansions also mooted. As little as two years ago it had been suggested that a tramway could be up and running by 2012 subject to approval of a £9 million Government grant, which needless to say, was not forthcoming. The idea was put forward by the Trampower group, who are probably best known for their attempts to develop a low-cost modern tramcar to be built in the UK. The prototype ‘City Class’ articulated tram, known as 611, was tested in Blackpool and Birkenhead but this came to an abrupt end when it caught fire during a period of trial running on the Blackpool tramway. Since then the tram is believed to have been extensively rebuilt and repainted in a new blue livery, but with the future plans of its owners now seemingly in tatters, the future of their prototype vehicle now also seems bleak.

However, after this article went ‘live’, it was discovered that the Preston Trampower Twitter page is still live and has been updated as recently as October 22nd, with claims that a short section of tramway will be opening in Preston next year! It was claimed that infrastructure works would commence on 21st October; an odd statement, as this date had already passed when it was announced. The Twitter page boasted that ‘Prestonians will be able to experience travel on a modern tram for the first time in the City of Preston in early 2014’, and that the ‘initial 1.25km length of track is the Demo line and is to be completed by early 2014’. It remains to seen which of the recent statements proves to be more accurate! 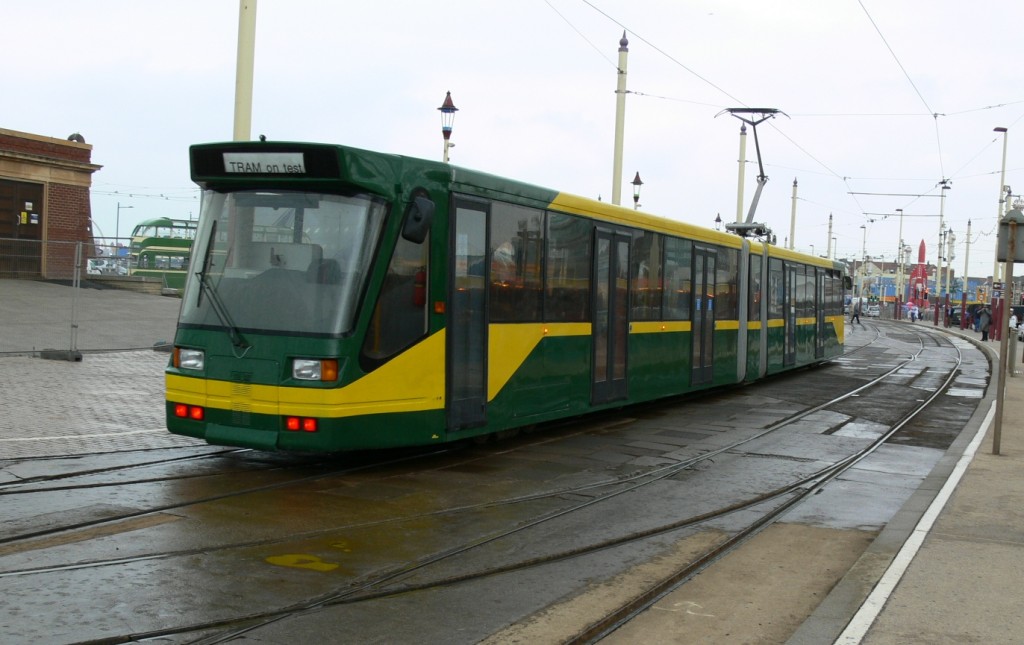 The sole vehicle created by 'Trampower', prototype car 611, seen on test at Blackpool during the 2006 Totally Transport event, some months before it was gutted by fire. (Photo by Tony Waddington)

11 Responses to Preston Trampower project “did not work out”