On Saturday 28th September, a private party was held at the Heaton Park Tramway for the birthday of one of the tramway’s most dedicated volunteer tram conductors. As the MTMS member in question hails from the city of Hull, it was agreed to operate Leeds 6 as a one-off on this special occasion, and the event was used to raise funds towards work on returning the car to its original guise as Hull 96. Indeed, this is likely to be the final time it carries passengers before regaining Hull livery.

Invited guests were able to ride on 6/96 for what is likely to be the only time at the park this year. The tram is currently part way through an overhaul and therefore its external condition leaves a lot to be desired, with the dash panels painted in light grey undercoat, and the body sides rubbed down for attention! However, there were plenty of people who were keen to reacquaint themselves with this tram, which has not operated in public service at Manchester since March 2010, shortly before it moved to Beamish on loan. It is planned to complete the work on this tram over the coming winter, once it can be safely accommodated inside the new Lakeside Depot, and hopefully it should be resplendent once more next spring. Before that happens, further research will be carried out to ensure that the maroon and white Hull livery is re-applied in an authentic manner, and the end result should be a big improvement from the rather dull grey livery worn by this car since it last received significant workshop attention.

Thanks to fine weather, Leeds 6 was joined by Stockport 5 on the main line and both trams generally operated as demand required for the guests who were present. The visitors were encouraged to make an optional donation of at least £6 towards the work on car 6/96, which many of them did, and there was also a birthday cake. In addition to the fun and games, other members of the Manchester Transport Museum Society were hard at work on preparing to lay the first rails between the current Lakeside terminus and the new depot site, with a number of sleepers being laid in position during the course of the day. All in all, it was a good day at Heaton Park and hopefully, thanks to the efforts of their dedicated volunteers, we can look forward to many even more exciting public and private events in the near future! 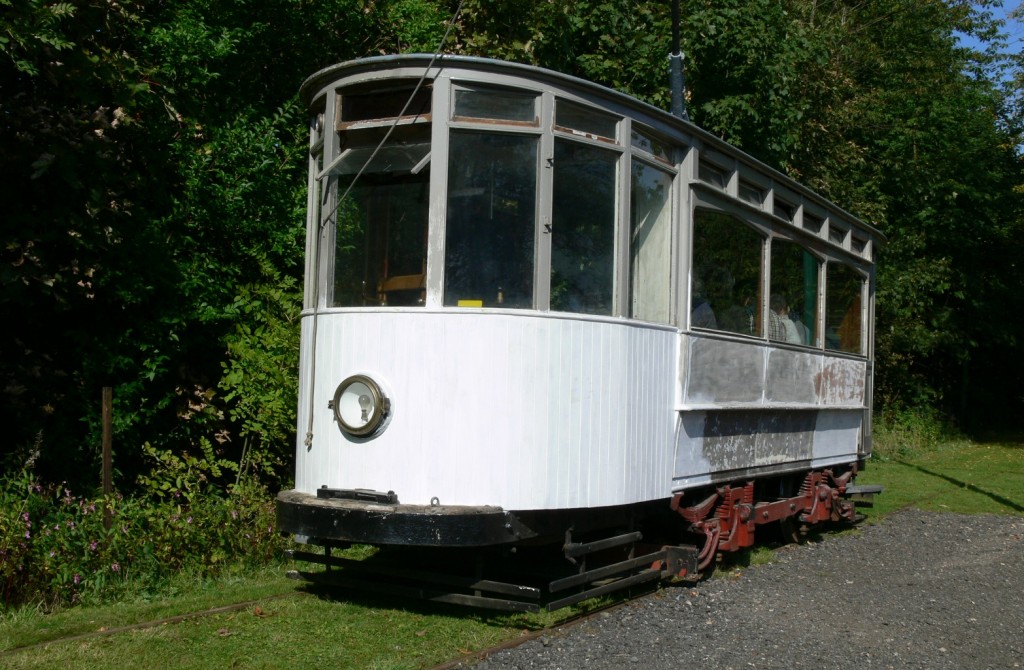 Leeds 6 in its current state takes a breather at Lakeside on 28th September. This is still fairly unfamiliar territory for the tram, which last saw regular service in Manchester long before this extension had been built. (Photo by Tony Waddington)