Following the surprise appearance of Leicester 76 outside the Exhibition Hall at Crich Tramway Village during the enthusiast event held on September 14th, it has been decided to make more use of this tram whilst it is easily accessible. Therefore, a special photo charter has been arranged for Saturday 28th September, which will hopefully feature a very rare appearance by 76 on the main line.

Billed as ‘an evening with Leicester 76‘, the shoot will take place outside of the normal museum opening hours, between 7:30pm and 10:00pm on the evening of September 28th. It is intended to try to re-create a 1920s period scene and pose the elusive tram in a number of different locations. Although not confirmed yet, this will hopefully include the car being posed in the Tramway Street, something not seen since it last ran in passenger service way back in the 1970s! To enable this to happen, 76 will require a workshop exam before it can be allowed out onto the main line, and the monies raised will cover the cost of this job, with any surplus simply being donated to the museum. The event has been arranged at very short notice as 76 is expected to be transferred back into the Exhibition Hall shortly, and whilst it is temporarily housed at the front of the running sheds, the opportunity to arrange a special photo shoot with it was deemed too good to pass up on!

Anyone who is interested in attending this unique event should contact Jason Cross, who is organising the photo shoot with David Williams, by sending an email to Jason.cross@15c.co.uk. Please note that the charge of attending is £25 per person, and that places will be strictly limited, so anyone wishing to attend is advised to make contact as soon as possible. 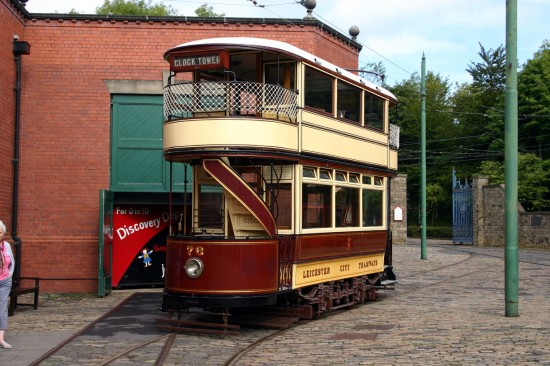 Leicester 76 is seen here during Enthusiasts' Day at Crich on 14th September during a rare appearance in the open. After waiting so long for the tram to be seen outside it will now be used for a Photo Charter on 28th September. (Photo: Gareth Prior)