In Pictures: Heaton Park Tramway have a Tramtastic day

Posted on Monday 4 July 2022 by Gareth Prior

Four trams in service and stored trams on display were amongst the highlights of the Heaton Park Tramway’s Tramtastic event which took place over the weekend of Saturday 2nd and Sunday 3rd July. Although a two day event this report takes a look at what happened on the first day – Saturday 2nd July 2022.

Tramtastic is the main enthusiast type event which takes place at Manchester’s Heaton Park Tramway and looks to showcase their entire fleet – both operational trams and those stored on site, waiting for such a time that there is funding and resource in place to restore them back to service.

On Saturday 2nd July the event started just after 1100 with a parallel run. Taking place on the only section of track it could (by its very nature a parallel run needs double track!), the two local operational trams – Stockport 5 and Manchester 765 – ran from Middleton Road Depot down to the Middleton Road Gates. With 765 on the right hand track (in the direction of travel to the gates) and 5 on the left hand track they gently ran down before the Stockport open topper was then edged through the open gates as far as it could go. Despite appearances to the contrary 5 was not making a break for freedom but was posed for some unique photos.

After the parallel run 5 and 765 entered passenger service and this two car service ran until around 1230 when it briefly became a three car service will Hull 96 entering service. 5 came out of service at lunchtime leaving 96 and 765 in passenger use before Blackpool 623 became the fourth car in service of the day. Again, there was a brief period when three trams were in service before 96 came out of use to leave 623 and 765 to complete the passenger service for the day.

In addition to the operational trams, there was a line-up of trams outside Lakeside Depot. Starting the day as a Blackpool streamlined line-up of Brush Car 623 and Balloon 702 as the day progressed this changed. Initially Stockport 5 joined the Blackpool pair and then when 623 entered service its place as taken by Hull 96.

Lakeside Depot was open to allow the closer inspection of some of the other stored trams – Manchester 173, Blackpool Railgrinder 1, Oldham 43, the Manchester Horse Bus and the Wotton Tramways tramcars. Meanwhile, up at Middleton Road Depot was Blackpool 619 which is under overhaul with a view to returning this to service in the future.

Despite a slow start on the day for passenger loadings, as the day progressed this improved greatly with the sun coming out and the people of Manchester popped out for a walk in the park and decided to add in a round-trip on the tram.

All in all, this was another enjoyable event at the Heaton Park Tramway as they showcased their varied fleet of trams. 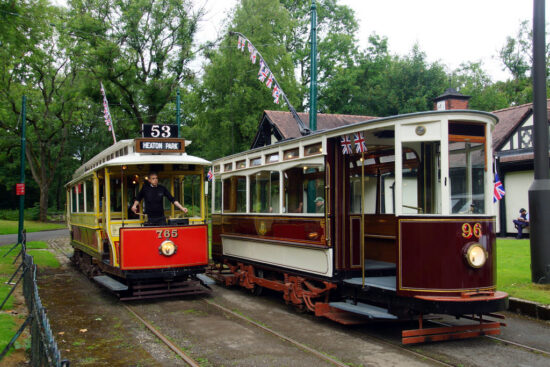 With Hull 96 stabled in the siding at Middleton Road Depot before entering service, Manchester 765 passes by. 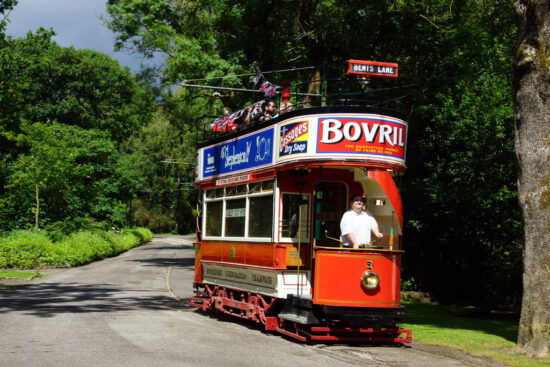 Stockport 5 comes around the curve as it heads down towards Middleton Road. 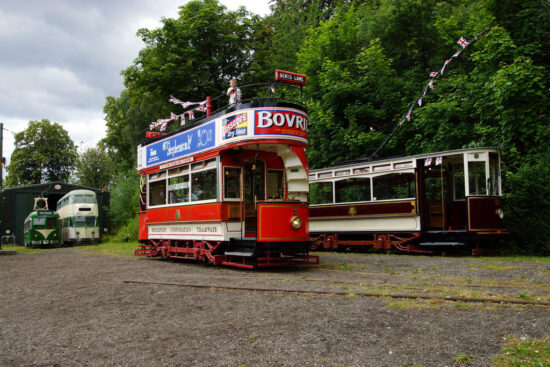 Stockport 5 and Hull 96 await their next duties outside Lakeside Depot. Blackpool 623 and Blackpool 702 are displayed behind. 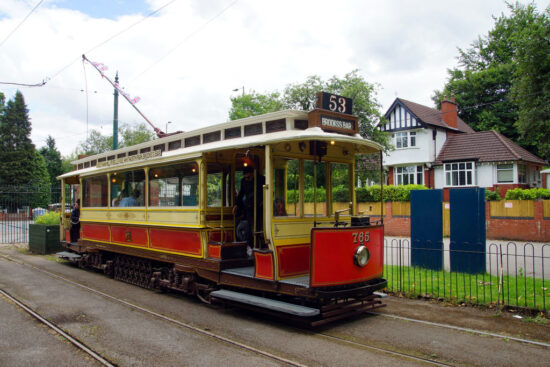 Manchester 765 at Middleton Road Gates with trolley turned and now waiting to head back up the line. 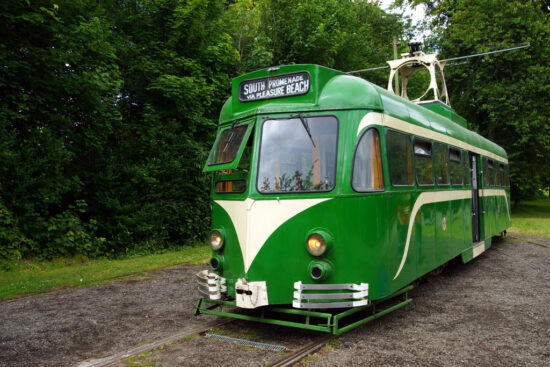