Leeds 107 comes out to play

The recent heatwave has persuaded open top trams at various locations across the UK into action, and even Leeds 107 was tempted to come out of its normal hiding place on Wednesday 17th July. This horse tram is now in the latter stages of a full restoration to running order, ahead of its much-anticipated launch at the Middleton Railway next month.

Recent progress has seen the dash panels, now adorned with the golden fleet numbers, fitted to the tram, which also sports the first of its decency boards and an advert panel at one end only. Some further paintwork has been continuing, along with work on the bell rods. However, the most exciting development of the latest weekly working party saw Leeds 107 moved outside over the railway’s ash pit so that further work on the underside could be undertaken on 17th July. This required a shunt around, with the workers at Middleton happy to oblige by moving two cranes out of the way, allowing the tram to soak up the sunshine. There was also time for a brake test, which happily proved the car’s braking equipment to be most effective. A very busy (and hot!) day of work concluded with the volunteers present enjoying a short photo session, to enjoy the fruits of their labours in daylight.

The valuable assistance of the workers at the Middleton Railway must also be mentioned, as without their support, as well as use of their facilities, the recent work on 107 could not have been carried out. The small team of volunteers have also been assisted by the Crich workshop, as of course the horse tram will ultimately be based there following its initial launch into service. It is expected that it will enter service in Derbyshire either this year or next, when it will become the first double-deck horse tram ever to run at Crich. 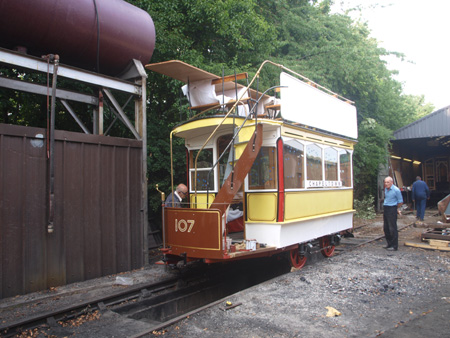 Leeds 107 basks in the afternoon sunshine at Middleton, showing off its newly fitted dash panel complete with ornate fleet numeral. 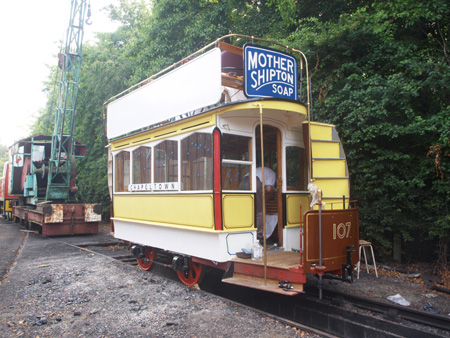 The other end of 107, showing the first of its external advertisements. (Photos courtesy of the Leeds Transport Historical Society)