Birkenhead 20 is set to return to passenger service at the Wirral Heritage Tramway this coming weekend and is joining in the party spirit as it does with special adverts for the Queen’s Platinum Jubilee. These will be 20’s first passenger runs since 2019 and it will be yet another welcome return to operation for a tram in the UK this year!

The popular four wheel open topper – a former British Trams Online sponsored tram when we funded its transport for its rather ill fated loan spell in Blackpool – has recently undergone commissioning and after this work it enjoyed a run out on the tramway during Sunday 29th May to make sure that everything was all as it should have been. With these runs a success 20 has been cleared for service and will be used over the Platinum Jubilee weekend.

When it runs over the weekend it will also be specially decorated for the Queen’s Platinum Jubilee with between deck adverts having been prepared and affixed to the tram. In receiving these designs it is currently the only heritage tram we know of which will be so decorated this weekend.

The Wirral Heritage Tramway will be operating throughout the Platinum Jubilee weekend between 1300 and 1600 daily as follows:

The tram services continues to run between Taylor Street (by the transport museum) and Shore Road by the old Police Hut (just before the line curves round to Woodside Ferry). Its still not possible to run beyond there to Woodside Ferry with track repairs required. 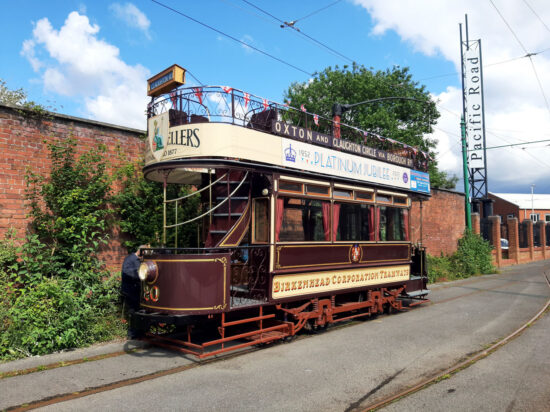 20 is seen during its commissioning run here at Pacific Road with flags and Platinum Jubilee adverts. 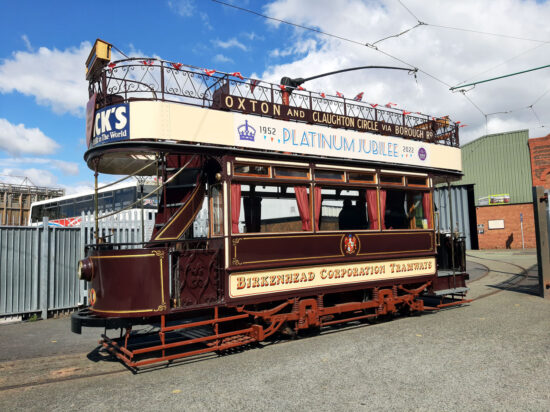 Back at Taylor Street following its commissioning run. (Both Photographs by John Hewitt, 29th May 2022)