The latest light rail network in the UK to celebrate the Queen’s Platinum Jubilee is the Tyne and Wear Metro with 4020 receiving special vinyls to mark the occasion. We’d previously said that Blackpool’s offering on 010 was underwhelming but we take it all back now as it seems to have involved a lot more effort than this one which has just seen four of official Jubilee logos affixed to the outside of the train!

4020 does actually have a connection with the Queen as it was used by Her Majesty to travel from Tynemouth to Haymarket on her visit to officially open the Tyne and Wear Metro network in November 1981. Prince Charles also rode on the train when he travelled on the Metro in November 2021.

As well as the Platinum Jubilee logos affixed to the outside of the train there are information cards with the logo and photos of the Queen’s visit in 1981 located in advertising panels inside the train.

The idea behind using 4020 for this purpose came from one of Nexus’ youngest staff members, 16 year old Alfie Gascoigne, an apprentice in the Bus Services Team. Alfie said: “All employees were asked what we could do as an organisation to celebrate the Platinum Jubilee. I think the fact that we have still got the original train which the Queen first travelled on 40 years ago is really special, so I suggested that we mark up that one train carriage to commemorate the Jubilee. It looks fantastic!”

Huw Lewis, Customer Services Director at Nexus, said: “We’re delighted to be joining in with celebrations for the Platinum Jubilee, this is one of a number of initiatives our teams have been working on. The 4020 has a special place in Metro heritage and it was a great idea of Alfie’s to add the official Jubilee livery to show our support and appreciation for Her Majesty. Thanks also to our colleagues at Stadler for their support in getting the logo on the Metrocar.” 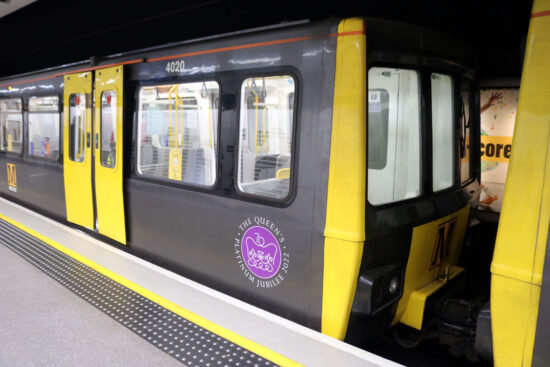 4020 shows off the Queen’s Platinum Jubilee logo on the front side. There are four in total on the train. (Photograph by Trevor Hall, 21st May 2022)