In Pictures: Points being installed on Douglas Bay Horse Tramway

We’re sometimes accused of adding some pointless posts to the site but this article definitely has a point to it – a set of points to be precise! The often controversial project to realign the Douglas Bay Horse Tramway from the centre of the road to the sea side of the road has finally seen some progress with probably the most high-profile set of points in recent memory being installed at the southern end of Central Promenade.

We’re sure you don’t need much reminding of what has been going on with the project – all part of a major redevelopment of Douglas Promenade – but here’s a brief recap. The decision was made that instead of the tramway running all the way between Derby Castle and the Sea Terminal in its existing position it would move from the centre of the road to the side and become single-track from close to Broadway. This required a new set of points to allow trams to access the single-track but the initial infrastructure installed was found not to be to the required standard so was removed and an order for a new set of points put in. The official word is that the later than hoped for delivery of these points has put into doubt the operation of the tramway in 2022 although the fact they are now here being put in maybe means the second update from Tim Crookall, Infrastructure Minister, that a brief season later in the summer may be possible was actually correct.

Obviously there is no word on when the horse trams may run again but this at least appears to be a positive move towards it. When/if trams do start running again it will only be on a truncated line from Derby Castle to Broadway – the section from there to the Sea Terminal remains awaiting its latest approval from Tynwald. 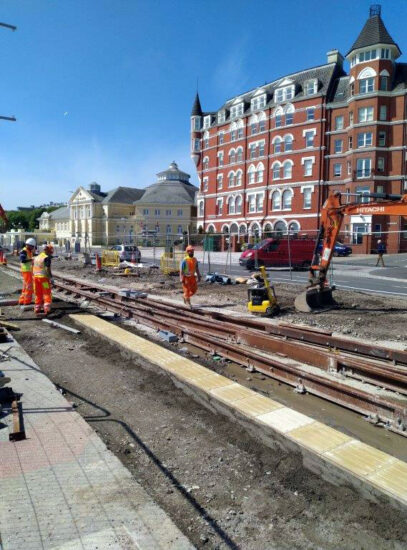 The new points being put int place. Villa Marina is the cream building in the background. 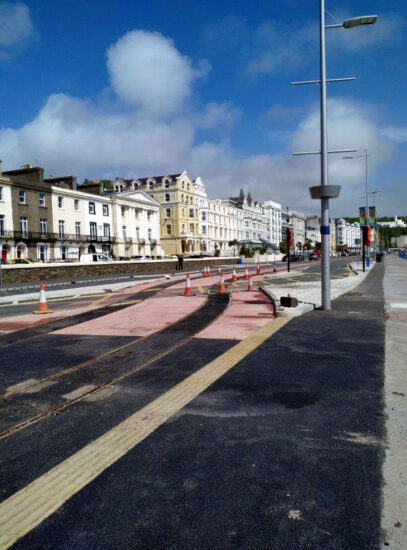 Looking back towards Derby Castle this view shows the tracks swinging across from the centre to the side of the roadway. (Both Photographs by Geoff Pickles, 18th May 2022)

3 Responses to In Pictures: Points being installed on Douglas Bay Horse Tramway