In Pictures: Progress at Picardy Place

Posted on Wednesday 4 May 2022 by Gareth Prior

As we’ve noted many times since construction work on the Trams to Newhaven project got underway in Edinburgh the first new stop on the line will be at Picardy Place. This is a replacement stop for York Place which closed permanently during February and will not only give access to that area of Edinburgh but also prove ideal for the St James Quarter development.

With work at Picardy Place having got underway last year (following on from other redevelopment works in the vicinity) they have now reached the stage of tracklaying amongst other works. The worksite from York Place to London Road is due to be completed by Autumn 2022 and is expected to be one of the last to be finished. Further details of the actual completion date are due to be given this summer. 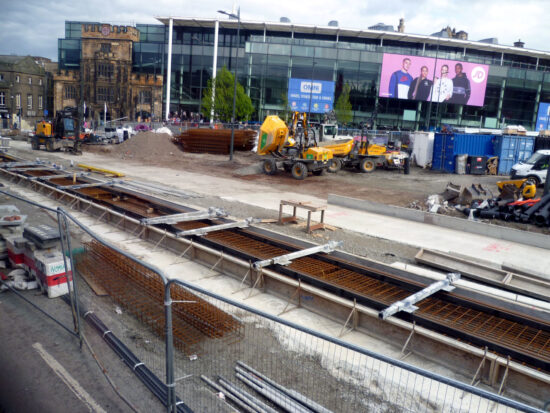 Taken from the favourite vantage point of the top deck of a passing bus this photo shows the site of the future tramstop with the Newhaven bound track in the foreground being laid. Contractor’s equipment fills the rest of the traffic island, designs of which have not yet been finalized according to the local community newsletter. The glass building beyond is the Omni Centre (cinemas, bars and restaurants, health club and the like) and Glasshouse Hotel, the hotel is entered through the retained façade of a former church. (Photograph by Roy Calderwood, 1st May 2022)