Posted on Thursday 21 April 2022 by Gareth Prior

There can’t have been many trams to have stayed for a period in Blackpool and never operated but that small list has been expanded with the departure of Halle 902 leaving for pastures new after an almost four year period of storage at Rigby Road Depot. Owned by the Tramway Museum Society 902 was only ever due to be in Blackpool for storage, although its length of stay was longer than originally planned.

Halle 902 arrived in Blackpool back on 22nd May 2018 for storage with no space available at the Crich Tramway Village. In the very nearly four years since it has resided in the depths of Rigby Road Depot it has barely been seen save for being spotted every now and then by those taking part in depot tours. It was originally expected to stay for two years but a certain pandemic saw this period extended. 902 had initially been due to depart in 2021 after the announcement that a number of non-operational trams would need to leave the depot because of the forthcoming redevelopment works but in the end this was delayed further – until now that is!

It was Thursday 21st April that saw Crich’s haulier of choice, Scotts Heavy Haulage, turn up at Rigby Road to load Halle 902 so that it could return to Derbyshire and further storage. Having not run since 2006 (and only limited use back then) and not being considered for future operation it isn’t heading back to Crich though with a space available for it to be kept at the off-site Clay Cross store where it joins other trams such as Derby 1, Blackpool OMO 5, Sheffield 46, Blackpool Dreadnought 59 and Leeds 600.

This becomes the second tram to leave Rigby Road since the announcement that trams would need to leave (Twin Motor 671 the other) and it now remains to be seen whether this is the start of an exodus of those trams or if we have some time to wait for the next departure. 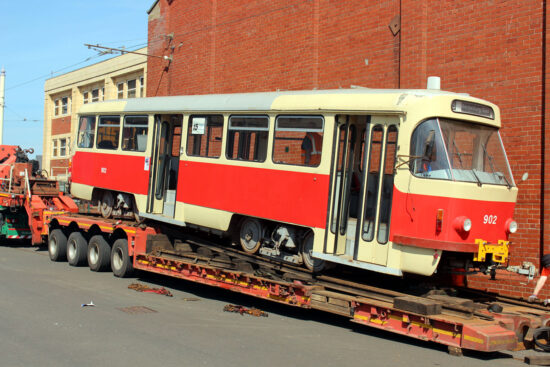 902 leaves Blackpool rails for the last time as its loaded on the back of the low loader. 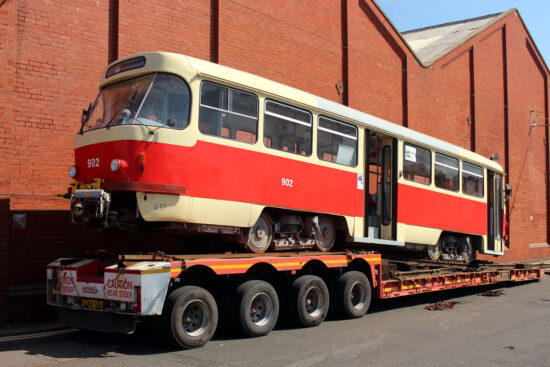 Fully on the low loader 902 now waits to be fixed before it leaves the Fylde Coast. (Both Photographs by Tony Armitage, 21st April 2022)