Its time for another edition of “Trams &” and it’s a trip to Crich and an event we have already featured several times – “Best of Sheffield”.

The below photo was taken on 17th May 2014 and could possibly be considered more as “Buses &” as the tram we feature is more in the distance and we can see no fewer than four buses. But that tram is the popular Sheffield 510 – which had just gone through the workshops for overhaul which included the reapplication of its special Last Tram Week livery – which is off up the line with another journey up to Glory Mine.

Of the four buses we see one is at the forefront and that is Leyland PD3 no. 904. Built in 1959 the bus is now preserved and makes regular appearances on the rally circuit. The destination blind of the bus is set for route 75 to Woodseats. 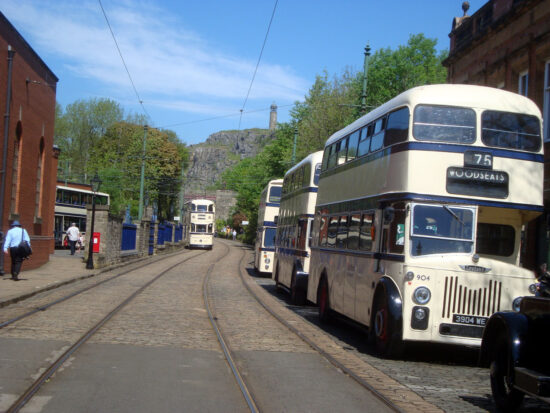