Beamish is again the location for this edition of “Trams &” with another of the resident trams in action alongside a visiting steam road locomotive during one of the special events.

This image was taken during the Great War Steam Fair on 8th April 2016 with the theme of the event being those vehicles which helped with the war effort and many visitors were in War Department livery including this McLaren Road Locomotive and trailer which is just crossing the tramway at Pockerley. It will the turn towards the camera and head towards the Town that way instead of climbing Pockerley Bank.

But Newcastle 114 – the tram seen at the stop unloading – will be tackling the bank in a few minutes to continue its journey around the tramway circuit. 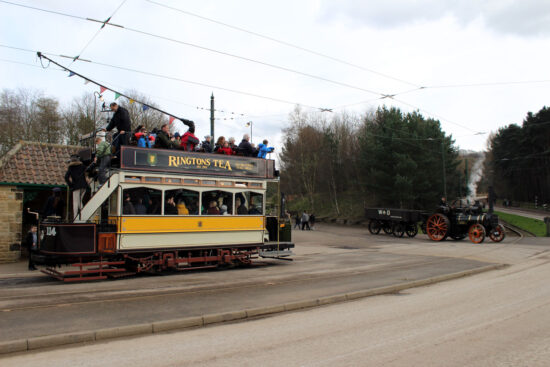