In Pictures: Work continues on the expansion of the East Anglia Transport Museum

Out of the limelight in East Anglia the volunteers at the East Anglia Transport Museum have been working hard over the past few months as the major expansion of the museum continues. This will eventually not only see an extended tramway but also a longer trolleybus route and railway line with the recently acquired land being put to good use.

On the tramway front a start has been made on laying more track onto the new land and following the installation of the rails concrete has been poured. Further work on the tram track is scheduled to take place over the coming weeks.

Elsewhere in relation to the tramway, London Transport 1858 has been receiving extensive testing over the past few months with it being the intention of returning this tram to service. Work has been undertaken on the horn guides to the axleboxes and also on the controllers. The tram has now commenced test running.

The East Anglia Transport Museum is open every Saturday and Sunday in the run-up to Christmas with a special Ride the Lights 2021 event taking place. Open between 1400 and 1800 on 4th/5th, 11th/12th, 18th/19th December the trams will be running along with a trolleybus service and the East Suffolk Light Railway will also be in action. The museum will also be open on New Years Day 2022 between 1200 and 1630. 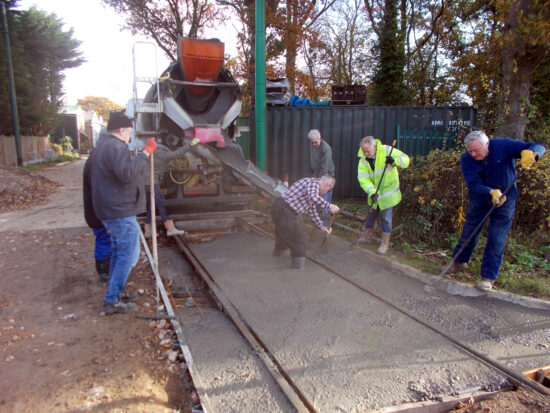 The concrete pour around part of the new tram tracks is seen here in action. (Photograph by Tim Major, 17th November 2021)