Storm Arwen causes major disruption across the north of the UK

The first major weather related disruption of the autumn/winter 2021/2 period has now happened with Storm Arwen causing major issues for several light rail and tram systems in the north of the UK – the Tyne and Wear Metro seeing a complete service suspension whilst there have also been delays and other disruption seen in Blackpool, Manchester and Sheffield.

With winds as high as 98 mph recorded and snow in places as well there were warnings ahead of time that there would be major travel disruption with some areas issuing a do not travel message. On the Tyne and Wear Metro the complete service was suspended late on Friday 26th November and this suspension remained in place at the start on Saturday 27th November.

A spokesperson from Nexus said: “Metro services remain suspended system-wide due to the impact of Storm Arwen. There is Metro ticket acceptance in place on the local bus network. We hope to resume some Metro services later this morning. People should only travel if it is essential and allow extra time to get to where they need to be. Our engineering teams have been out through the night, and continue to work to get the network ready to resume Metro services. In one of the most challenging nights we have faced for many years, our teams have been dealing with multiple issues or debris and fallen trees on Metro lines. They have had to clear fallen trees close to Ilford Road, Wallsend and Benton Metro stations. Our colleagues at Network Rail are dealing with a fallen tree on the overhead lines at Fellgate. Test trains are being operated to check for further damage and ensure that it is safe to re-open now that the Met Office weather warning has changed from red to amber.”

In Blackpool there were multiple issues which caused service disruption; the most serious of these was a collapsed building opposite the Metropole Hotel which led to a split service being operated between Starr Gate and North Pier and from Cabin to Fleetwood Ferry on the evening of Friday 26th November. Later on the same evening the complete service was ended earlier than usual because of the high winds. Saturday 27th November and with trams still unable to run past the building there was no service north of North Pier and for a time during the morning there was no service as a result of a build up of sand on the Promenade.

It was a fallen tree causing problems for Manchester Metrolink affecting services on the Oldham and Rochdale line. The tree had fallen beyond Shaw & Crompton which meant that all trams from East Didsbury were having to terminate at Shaw & Crompton. The disruption was expected to continue until at least the afternoon of 27th November.

Meanwhile, it was snow that was the problem for Stagecoach Supertram (with Sheffield often suffering worse from snow than other locations with trams in the UK). A reduced service was in operation from the start of service on Saturday 27th November with issues with points freezing and also heavy traffic caused by the poor road conditions meaning the trams couldn’t get through.

The issues also weren’t only confined to modern tramways as Beamish announced they would be closed on Saturday 27th November as a result of the poor weather conditions – just as Santa was due to arrive for the start of the festive celebrations! 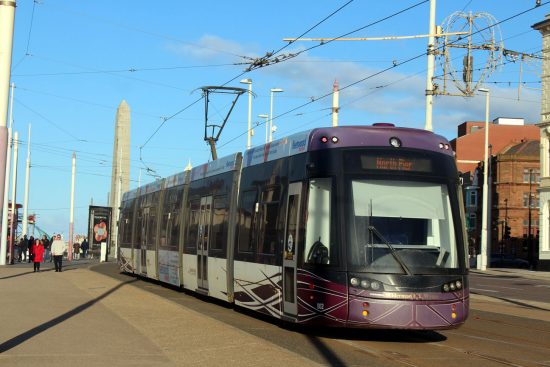 002 terminates at North Pier with the tramway blocked any further north. 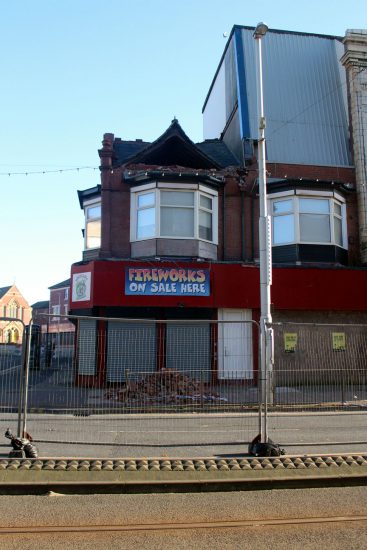 The building opposite the Metropole Hotel which caused the service suspension. Bricks on the ground show what was the issue. (Both Photographs by Tony Armitage, 27th November 2021)