Posted on Tuesday 30 November 2021 by Gareth Prior

The first phase of the redevelopment of Gosforth Depot on the Tyne and Wear Metro has now been completed which will allow further demolition work to get underway as the project continues. The £70 million project is being undertaken by Stadler as part of their contract which includes the construction of a new fleet of trains along with both their and the current fleets maintenance. Eventually there will be a state of the art modern facility at Gosforth which will house the 46 new trains to be built in Switzerland.

The first phase of the project has included groundworks, the partial demolition of the main depot buildings and the removal and renewal of train stabling lines. Work will now move on to the second phase which will see the current sheds to the west of the depot demolished whilst work will also start on constructing new depot buildings. There will be two final stages of demolition during 2022.

Rob Baxter, Managing Director of Stadler Rail Service UK, said: “This is a hugely ambitious project, taking place in an area of the country with a strong railway heritage. Although work to build a new depot only started last year, I am delighted that great progress is being made, with the site really taking shape. Partners involved in this project are working together closely and effectively to manage this complex construction challenge. With the new sidings now ready, it’s already beginning to look like a home for the brand new trains arriving from next year.”

The work on the depot site is being completed by Volker Fitzpatrick on behalf of Stadler with local firm Thompsons of Prudhoe involved as sub-contractors for the demolition.

The building work has been designed to allow for the continued operation of the depot for Tyne and Wear Metro services although a second temporary facility has also opened at Howdon in North Tyneside.

Martin Kearney, Nexus Chief Operating Officer, said: ““Great progress is being made with our new £70m Metro depot at Gosforth, which is going to house the new Metro train fleet. I’m pleased to say that the first phase of this transformative project is complete, on time and on budget, paving the way for further demolition work of the 100-year old depot building on site, and the start of the construction of the new depot facility.

“We can look forward to seeing the first new Metro train arrive at this state of the art facility at the end of next year. It is a historic project, which secures a very bright future for the Tyne and Wear Metro, as well as benefiting the local supply chain. Stadler has already begun manufacturing the new trains over in Switzerland and by 2023 we will have the first new train in full service, following a period of training and testing. The new trains are going to transform the quality of services we can offer our customers.”

There has been a depot on this site in Gosforth since 1923 when it was opened by the London and North Eastern Railway with the Tyne and Wear Metro moving in from 1980. It covers 12 acres and is located close to Regent Centre station in the suburbs of Newcastle. The new depot facility will include inspection roads and pits, cranes, jacks, test facilities, automatic train checking equipment and a wheel lathe. There will a dedicated wash plant to clean the train exteriors along with other dedicated areas for daily and periodic deep cleaning.

The outside area has been designed to optimise train movements whilst also keeping noise to a minimum for the benefit of local residents. The complete facility has been designed to ensure maximum availability and reliability of the fleet while improving the working environment. It will become home to a wide range of activities, including preventative and corrective maintenance, overhauls and train presentation. In addition there will be storage for spare parts and material supplies and office space for training and support functions.

The new building will also promote sustainability, providing an attractive environment for employees. It will make the best use of natural light and all work spaces will have windows. There will be energy efficient lighting with solar panels on the roof to help reduce overall energy consumption. Water recycled on site and rainwater will be used for train washing facilities and toilets. 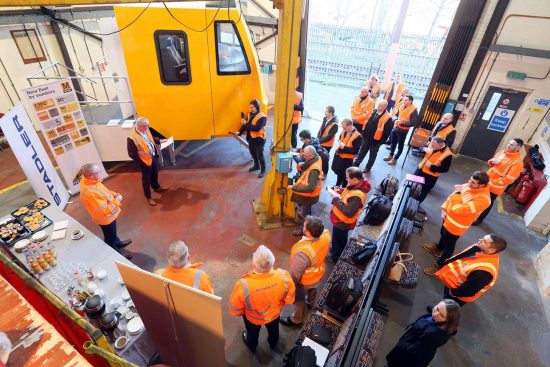 Invited guests during an event at the depot on 24th November see the mock-up of the new train cab along with some of the new seating. 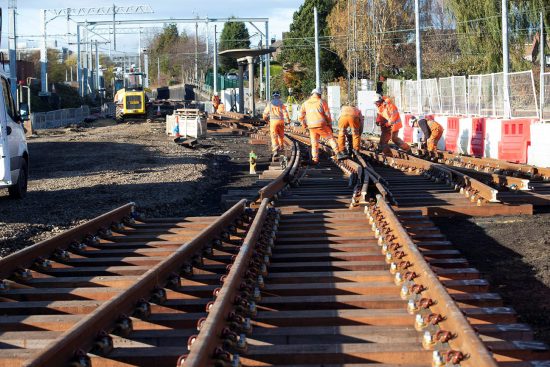 Trackwork underway at the depot. (Both Photographs courtesy of Stadler Rail)