It’s a trip to Beamish again for this latest edition of “Trams &” as we take a look at one of the fleet of trams in operation and finding a steam locomotive on its way around the tramway circuit.

Oporto 196 received this attractive blue and primrose livery based on the South Shields colours after overhaul in 2012 and it really does add a splash of colour in the tram fleet. On 4th April 2013 we see the tram running around the museum tramway in a clockwise direction and it has just come of the Town making its way to Pockerley.

As it does it comes to the end of the Rowley branchline with the then operational steam loco on that line conveniently arriving at the same time. That steam loco is National Coal Board no. 22 which was built in 1949 by Andrew Barclay Sons and Co in Kilmarnock. 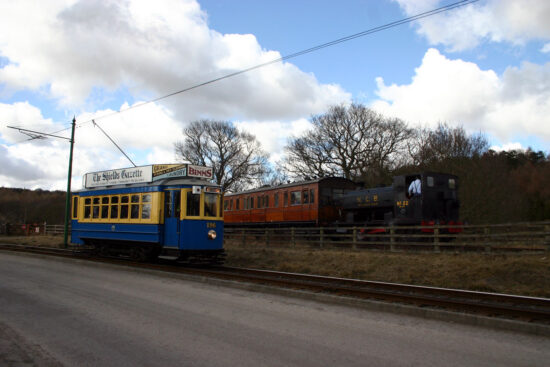