As October enters its final week the work to complete the West Midlands Metro track relay and Eastside junction installation is rapidly coming towards an end with most of the tarmac now down and attention turning towards the finishing touches – including line painting to make it clear what sort of vehicle should be going where! In addition in this article we take another trip out onto the further Eastside extension to see what has been happening since we took a look at the work in Gallery 975.

When the line between Bull Street and Library closed on 24th July it was announced as at least a three month closure and although we are now slightly over that period work is coming to an end and its shouldn’t be too long before trams start to run again (with testing due to take place later this week). As well as the track relay – which was said to be done at this time to avoid future closures as it wasn’t due for replacement at this time – the closure has also enabled the installation of the all-important delta junction to the forthcoming Birmingham Eastside extension.

Speaking of the Eastside line, this will be a 1.7 km extension of the West Midlands Metro network but doesn’t currently have an opening date as it is tied into construction works for HS2. When services do eventually commence there will be a tram every 6 minutes at peak times with a planned for four new stops built including a terminus at High Street Deritend and will also give excellent connections to the HS2 station at Curzon Street and Birmingham Coach Station. 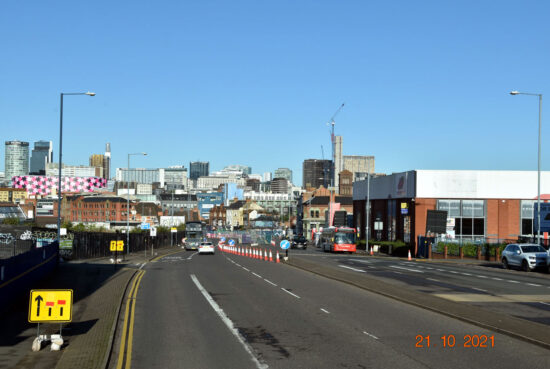 Starting off on the Eastside extension and this is the very start of the contraflow in Deritend near Tesla. 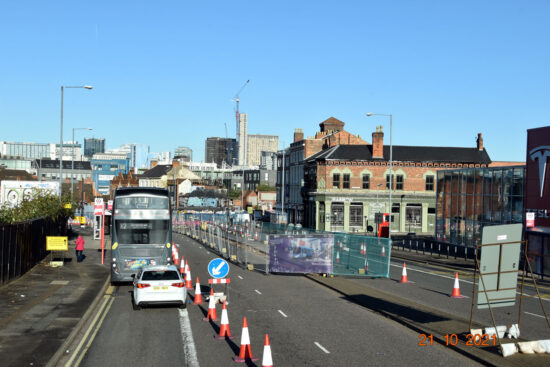 The start of the ground works with the worksite beyond the barriers. Note the road lane closures as well. 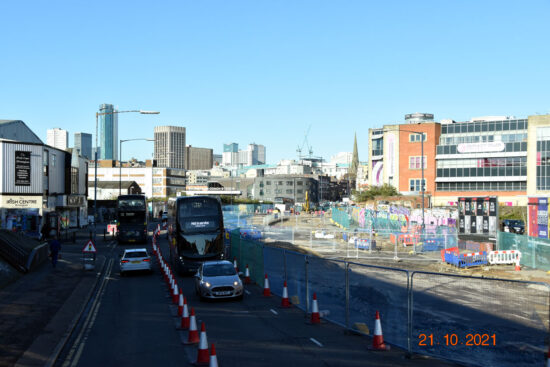 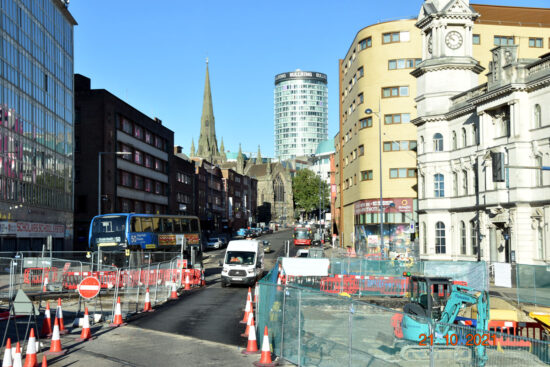 The end of the current road works at Digbeth Police Station (the white building on the right). (Photographs x4 by Ken Jones, 21st October 2021) 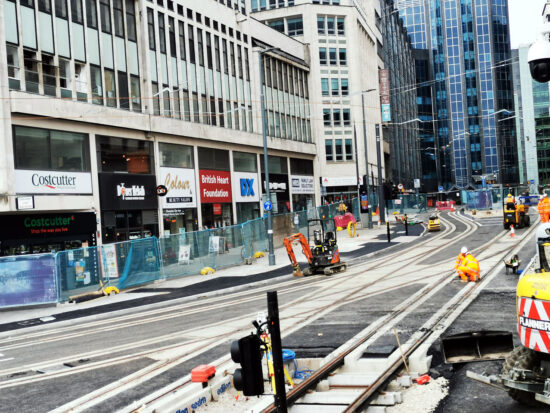 Looking up Bull Street where the final layer of tarmac has now gone down around the tracks and is being flattened on the right. As can be seen here further finishing works are still required surrounding the tracks. 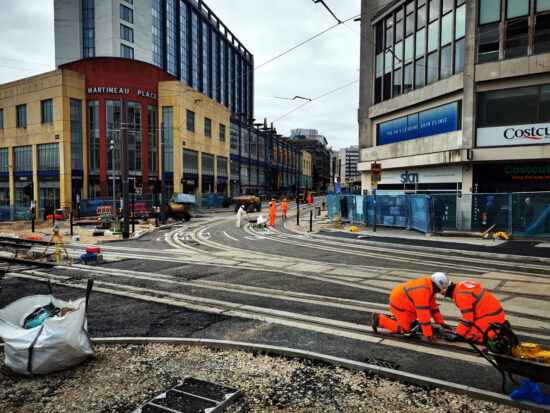 Looking from Bull Street with the tracks curving into Corporation Street. The tracks going left head to the Eastside extension. 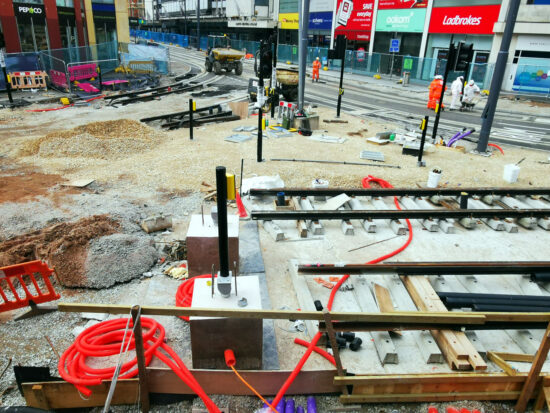 This is as far as the tracklaying onto the Eastside goes. The current line onto Corporation Street is seen at the far side of the picture. 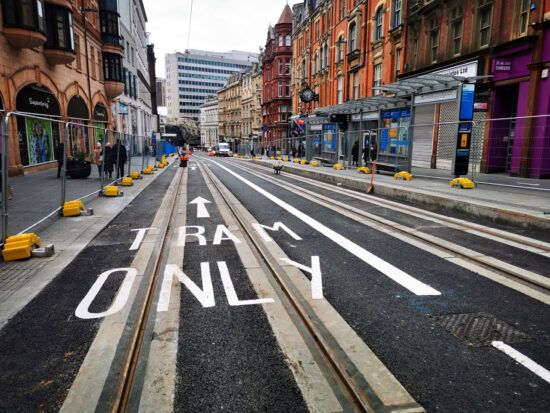 On Corporation Street (with the outbound platform on the right) where line painting has now taken place making it clear that this is tram only. It seems that this section is more or less complete now. (Photographs x4 by Andy Walters, 23rd October 2021) 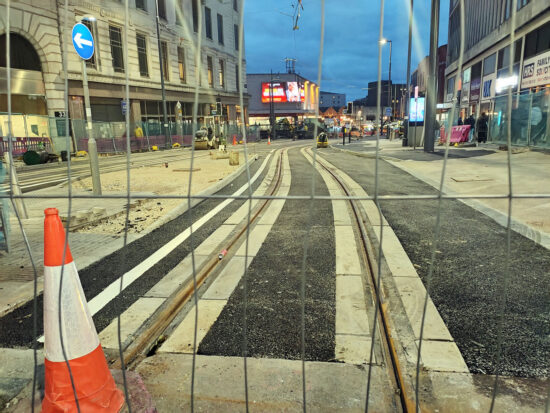 A view at dusk on Bull Street giving another view of the recent tarmacking. 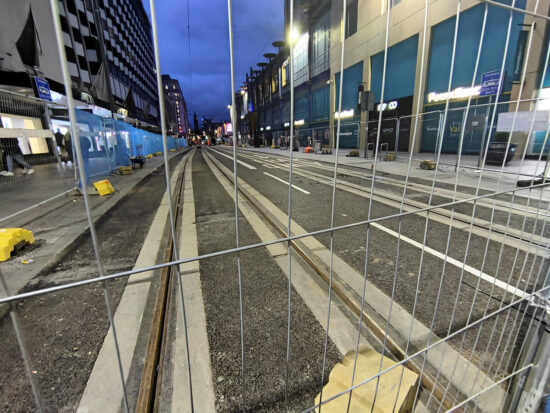 This is Corporation Street again looking out of the city centre. (Photographs x2 by Mark Cufflin, 23rd October 2021) 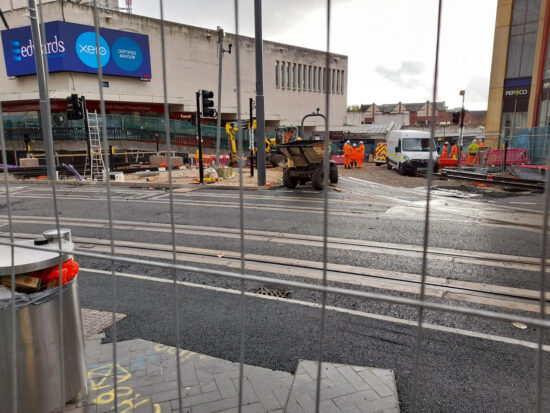 Onto 25th October and more progress on the finsihing works. This is as Bull Street curves round to Corporation Street with the Eastside extension straight ahead. 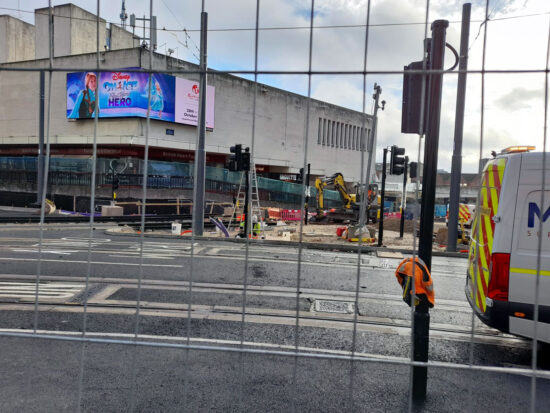 And another shot of the junction with more finishing works having been completed including an island between the junction tracks. (Photographs x2 by Dan Noon, 25th October 2021)