In Pictures: Progress continues on Trams to Newhaven project

Posted on Thursday 14 October 2021 by Gareth Prior

As we return to Edinburgh to view recent progress on the Trams to Newhaven project we head to the area around Ocean Terminal. In this update we see more track going down in this section including on the recently constructed ramp which takes the tramway up to Lindsay Road. John Hampton with the pictures.

Ocean Terminal will be the penultimate stop on the extension and is likely to be one of the busier stops on the line with it being a key interchange with local bus services as well as being the home of a major shopping centre and visitor attractions such as the Royal Yacht Britannia. After Ocean Terminal the final stop will be the Newhaven terminus with the previous stop being Port of Leith.  Work at Ocean Terminal itself was originally due to be finished in autumn 2021 with that from there towards Melrose Drive scheduled to be completed in summer 2022. 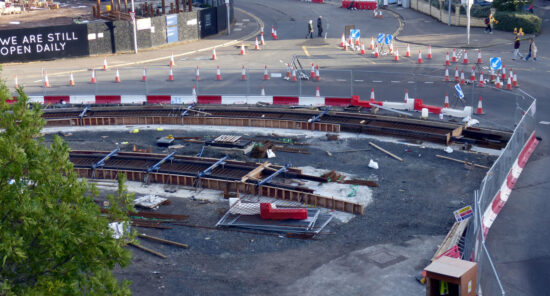 This view is taken from the car park at Ocean Terminal and shows the tracks continuing around the corner from the Ocean Terminal tramstop (just out of sight on the left) into Melrose Drive and then onto Newhaven. 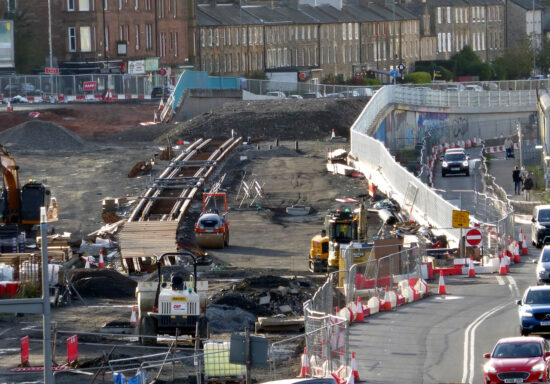 Tracklaying is also now taking place on the newly constructed ramp which will take the tram from Melrose Drive up to the level of Lindsay Road and then onto Newhaven. (Both Photographs by John Hampton)